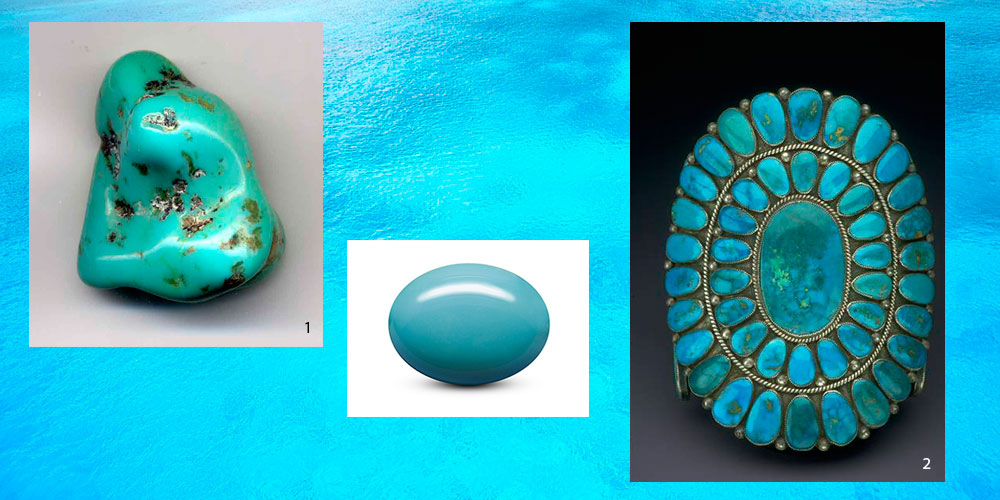 Its shining sky blue is one of the most popular trend colours in the world of jewellery and fashion.

In many cultures of the Old and New Worlds, this gemstone has been esteemed for thousands of years as a holy stone, a bringer of good fortune or a talisman. It really does have the right to be called a 'gemstone of the peoples'. The oldest evidence for this claim was found in Egypt, where grave furnishings with turquoise inlay were discovered, dating from approximately 3000 B.C..

In the ancient Persian kingdom, the sky-blue gemstones were earlier worn round the neck or wrist as protection against unnatural death. If they changed colour, the wearer was thought to have reason to fear the approach of doom. Meanwhile, it has been discovered that the turquoise certainly can change colour, but that this is not necessarily a sign of impending danger. The change can be caused by the light, or by a chemical reaction brought about by cosmetics, dust or the acidity of the skin.

In earlier times, turquoises were even responsible for the material wellbeing of the wearer. The Persian scholar Al-Qazwini, for example, wrote: 'The hand that wears a turquoise and seals with it will never see poverty.' Turquoises were often worn on the turban, and often surrounded with pearls, in order to protect their wearer against the 'evil eye'. As talismans, they adorned daggers, sabres and the bridles of horses. It was not until the time of the crusades that they came to Europe. Indeed it is from that period that the name 'turquoise' originates, meaning 'Turkish'.

In South, Central and North America too, the turquoise has always occupied a very special position among gemstones. The Aztecs in Mexico, for example, used to decorate their ceremonial masks with this stone which was holy according to their beliefs. The Indians of North America, who still produce a good deal of traditional silver jewellery with turquoises today, believe that the sky-blue gemstone opens up a direct connection between the sky and the sea.

At all times and over the world, turquoises have been worn as natural protection against the powers of darkness. If in earlier times they preserved horse and rider from unexpected falls, they are regarded today as the protective stone of pilots, air crews and other occupational groups who are exposed to an especially high degree of risk.

In modern gemstone therapy, those suffering from depression are recommended to wear a turquoise or a chain with turquoise beads. The turquoise' cheerful colour is said to endow reticent personalities with more confidence. It is also often given as a gift, a stone of friendship, for the turquoise is said to be responsible for faithfulness and constancy in relationships.

The blue comes from copper, the green from iron

Turquoise is a copper aluminium phosphate with a hardness of 6, i.e. considerably softer than quartz. In Nature, it occurs in the whole range of hues from sky blue to grey-green, and it is mostly found in places where there is a high concentration of copper in the soil. However, turquoise is only really turquoise in the very best quality; mostly, the colour is paler, or bluish-green or greenish.

The blue colour is created by copper, the green by bivalent iron and a certain amount of chrome. Often, the material has veins or blotches running through it, which are brown, light grey or black depending on where it was found. These lively, more or less regular patterns are known as 'turquoise matrix'. The crystals are microscopically small and can hardly ever be recognised with the naked eye.

As a rule, turquoise occurs as a fillung in veins or crevices, or in the form of nuggets. The most well known deposits are in the USA, Mexico, Israel, Iran, Afghanistan and China. The most beautiful turquoises, in a splendid light blue, come from deposits in the north of Iran.

Turquoise is rarely faceted. Usually, it is cut into cabochons or beads, or into some more imaginative shape.

Being relatively soft, turquoises are sensitive. As the colour may pale when the stone has been worn for a long time, even high-quality stones today are treated with wax and subsequently hardened. This treatment makes the sensitive gemstone more resistant. In the trade, there are a large number of reasonably priced turquoises sealed with synthetic resin. They have a fresh colour and good durability. However, many of them are dipped in a colouring medium before being subjected to durability treatment - a process that must, according to the rules of the ICA, be drawn to the attention of the prospective purchaser. And there is also such a thing as a 'reconstructed turquoise', which is made from pulverised turquoise.

Because of their sensitivity, turquoises are almost always subjected to treatment of one kind or another, though this may take any of a number of different forms. For this reason, turquoises which have a good natural colour and are simply hardened with colourless wax or synthetic resin have a much higher value than stones whose colour has been 'improved'. So it is more advisable to purchase valuable turquoise jewellery at a jeweller's.

The best quality turquoises are of a pure, radiant sky blue, a colour which is highly esteemed with or without its fine, regular matrix. The more strongly the colour tends toward green and the more blotchy and more irregular the matrix, the lower the estimate of the stone's quality.

Turquoise should be protected from cosmetics, heat and bright light. It is not a gemstone to take with you when you go sunbathing. It is best to give it a clean from time to time with a soft cloth.

The colour of the turquoise makes us feel happy and cheerful, for in it the light blue of the sky and the stimulating green of the sea are combined. Indeed it is such an inimitable colour that we have coined a term specifically for it in our languages: turquoise. Anyone choosing a turquoise is sure to enjoy a piece of Heaven ... on Earth.