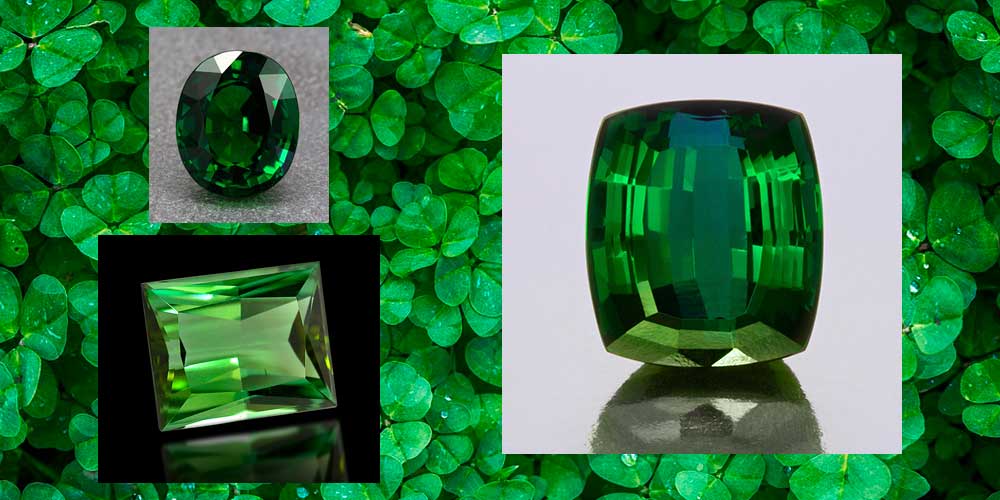 The tourmaline is a unique miracle of colour. The gemstone comes in green, red, blue, yellow, but there are also colourless specimens and black ones.

Often two or more colours are found in a single tourmaline crystal. Also rare and very highly esteemed are tourmalines which appear to change their colour and cat's eye tourmalines. Having said all that, green is regarded as the classical tourmaline colour. If you ask a gemstone merchant about a tourmaline, green, in most cases, is the first colour he will think of.

However, even among the green tourmalines there is a broad spectrum. Some of them are very light, others so dark that the green colour can only be recognised when the stone is held against the light. There are green tourmalines in fine leek hues, but also in intense yellowish-green, olive green and brownish-green nuances. And there are especially wonderful tourmalines in the range from blue-green to dark bottle-green.

These, indeed, are its best colours. They are rare and much sought-after. Green tourmalines are very popular as precious stones among women, but many men like wearing them too.

How it is that a 'Brazilian' tourmaline can come from Africa

In the trade, tourmalines are sometimes offered with a prefix on their name which, at the first glance, would appear to hint at their origin. A bottle-green tourmaline, for example, may also be referred to as a 'Brazilian tourmaline'. At this point it is useful to know that this does not necessarily mean that the stone comes from Brazil. Earlier, it was more or less the rule that bottle-green tourmalines came almost exclusively from Brazil, whilst stones which were green or blue-green generally originated from Africa. Today, things are different.

However, these names continue to be used in the trade, with the result that, independent of the place where they were actually found, bottle-green tourmalines are often referred to as 'Brazilian tourmalines' and those which tend more to green or blue-green as 'African tourmalines'. Another term, which is rarer and generally used more by specialists, is 'verdelite'. This name comprises the Latin 'viridis' (green) and the Greek suffix 'lith' (stone). The correct general term is 'green tourmaline'.

Tourmalines are borosilicates with a very complex structure. The colours are caused, among other things, by tiny amounts of foreign matter and trace elements. Because of the complex structure of this gemstone, it exists in an almost endless number of varieties and colours depending on where it developed.

There is something fascinating about this individuality, for practically each deposit has produced its own kind of tourmaline. With a little luck, now and then one may come across a really special highlight in the trade: a chrome tourmaline. That is the name given to the emerald green variety from Tanzania, coloured by vanadium and chrome. Its colour is extraordinarily beautiful, and amazingly similar to that of a fine emerald, which, after all, is among the most expensive gemstones in the world.

In the form of small, mostly dark crystals, tourmalines can be found practically all over the world. The places which supply crystals so large and beautiful that precious gemstones can be cut from them are, however, much, much rarer.

The major green tourmaline deposits are in Brazil, Namibia, Nigeria, Mozambique, Pakistan and Afghanistan. But green tourmalines of good colour and transparency are a rare thing in any gemstone mine. And if, in addition, they are also free of inclusions, they are very highly coveted indeed.

Not easy to cut

Green tourmalines can be cut in all kinds of different ways. However, the cutting of a tourmaline does require special care, since the colour intensity of most green tourmalines is variously developed depending on the direction of growth. For this reason, dark stones have to be cut in such a way that the table is parallel to the main axis. With light stones, on the other hand, the table surface should be perpendicular to the longitudinal axis, in order to receive more depth of colour.

When aligning the cut, the cutter must pay great attention to these facts, otherwise the cut gemstone will end up too light or too dark. And that would be a pity, for the green spectrum of the tourmaline has something fascinating about it, and not only in the eye of the connoisseur. The colours it contains are extremely pleasant to the eye and harmonious. The green tourmaline is like life itself, with all its facets of individual vivacity.