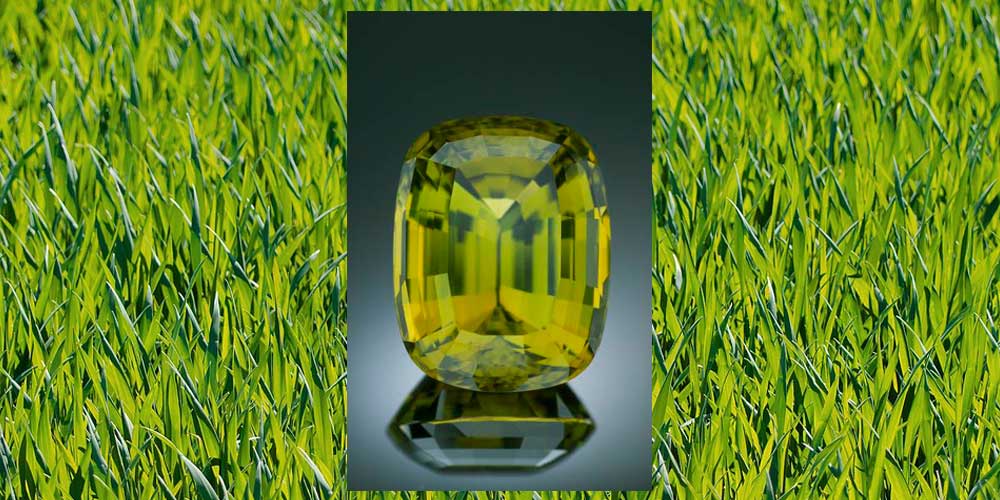 Like the eye of a sleek feline predator, the chrysoberyl cat's eye winks at the astonished observer – a real miracle of Nature!

That's why only this attractive gemstone has the right to the short, fitting name of "cat's eye". This gem is really something special with its narrow, bright band of light on a shimmering golden background, which seems to glide magically across the surface when the stone is moved.

(For your information: cat's eye effects can also occur in other gemstones, but these always have to be referred to more precisely by adding the name of the gemstone concerned: e.g. quartz cat's eye.)

Often, the name chrysoberyl is spoken in the same breath as that of the beryl group, the most well known representatives of which include the emerald and the aquamarine. The name 'chrysoberyl' comes from the Greek and means 'gold-coloured beryl'.

In spite of its name, however, it is not actually a beryl at all. Together with alexandrite ,chrysoberyl forms an independent gemstone category, in which the former, which appears to change its colour, is regarded as the more attractive representative, though in fact it is quite definitely the chrysoberyl cat's eye which is entitled to stake that claim.

From a mineralogical point of view, chrysoberyls are aluminium oxide containing beryllium, and thus actually have little in common with the beryls, which belong to the silicate family. Indeed, with their excellent hardness of 8.5 on the Mohs scale, they are clearly superior to the beryls.

The popular chrysoberyls come in many nuances between lemon and greenish yellow, and in honey colours and shades from mint green to brownish green, and are mostly found in the gemstone deposits of Brazil, Sri Lanka or East Africa.

Since ancient times, chrysoberyl has been regarded as a gemstone which protects its wearer and keeps disaster at bay.

The cat's eye most of all is seen as a particularly effective protective stone and talisman. On account of its golden tones, chrysoberyl is often also associated with wealth – and this idea is certainly not without foundation, since in its most beautiful form as a high-quality cat's eye it is up among the gemstones of the luxury class.

Discipline and self-control are the qualities mainly associated with chrysoberyl in modern gemstone therapy. Chrysoberyls are said to promote concentration and the ability to learn, and to enable the wearer to think clearly and far-sightedly.

Thanks to the secret power of the chrysoberyl, negative thoughts are said to be transformed into positive energy. And these positive qualities are said to be even more marked with a chrysoberyl cat's eye. However, chrysoberyl is also regarded as a gemstone which promotes tolerance and harmony, and it is one of the lucky stones for those born under the sign of Leo.

The magical eye of the cat

Chrysoberyl cat's eyes are genuine rarities which are found only in a few deposits in the world, together with other varieties of chrysoberyl. One can hardly imagine that a gemstone could wink like the eye of a cat in such a remarkably genuine way. Is it magic, or Nature? And apart from that, what is it that causes this irresistibly beautiful show of light?

Scientists have discovered that very fine inclusions, deposited in the stone, are responsible for this fascinating phenomenon. The incident light is reflected off them, so that a bright strip of light appears, running perpendicular to the inclusions, similar to the eye of a feline predator.

When the stone is turned, this strip seems to glide away across the surface of the stone. In technical terminology this phenomenon is known as 'chatoyancy', which comes from the French 'chat' (for cat) and 'oeil' (for eye). Whilst chrysoberyls lacking the cat's eye effect are mostly faceted, cat's eyes are always cut into cabochons, since only tall, rounded shapes render the line of the eye properly visible.

The chrysoberyl, with its hues ranging from honey-coloured to mint green, is a popular gemstone, and one which is esteemed by connoisseurs and gemstone lovers the world over. In its most attractive variety, the cat's-eye, it is an extremely valuable stone for those in the know. In general, the value of a chrysoberyl - as with other gemstones - depends on its quality, that is to say its beauty, colour and attractiveness, the depth of the colour and its transparency.

Anyone who wants to acquire a cat's-eye of good colour and with a finely marked eye-line will be obliged to dig fairly deep into his pocket, for these gems fetch much higher prices on account of their beauty and rarity. When buying a cat's-eye, you should be aware of this: it is important that the 'eye' has a fine line running right through it, and that it can be recognised clearly. In particularly good specimens, it seems to open and close when the stone is turned.

Fine cat's eyes should be of a distinctive colour and be as transparent as possible. The most popular ones are those of a beautiful honey yellow and those with fine green tones.

Chrysoberyl cat's eyes are among the most beautiful things that Nature has created. Again and again, they fire the enthusiasm of those who are looking for something individual and unique. Cat's eyes are also well suited to being worn as jewellery by men. And without doubt, many a man has allowed himself to be seduced by a beautiful cat's eye too.