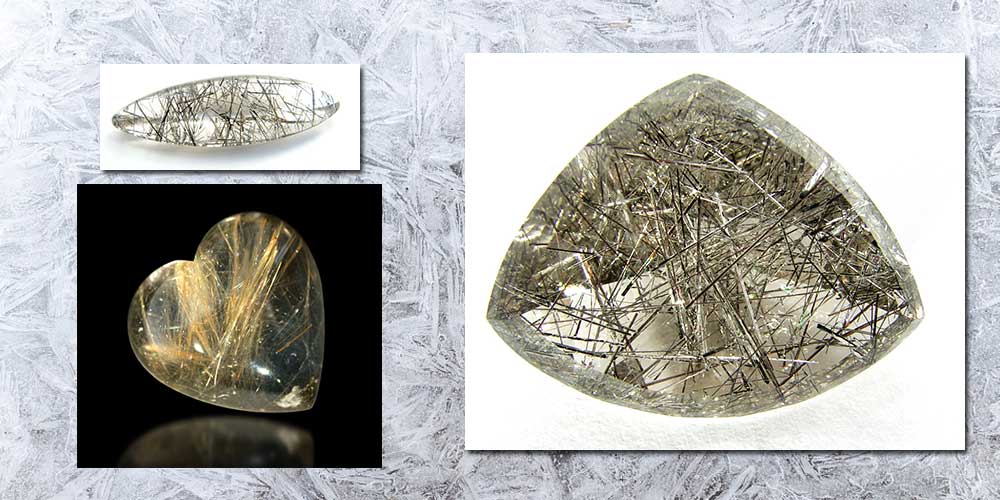 If you gaze deep into a crystal ball, you will see a versatile gemstone, one of the most popular gems on earth.

Beautiful quartz, the 'rock crystal' used in ancient times to make crystal balls and bowls, is today more often seen set in gold jewellery. Despite the popularity of quartz gems like amethyst, citrine, ametrine, rose quartz, onyx, agates, chrysoprase, rutilated quartz and other varieties, many people in the jewellery industry take quartz for granted because of its affordable price.

Throughout history, quartz has been the common chameleon of gemstones, standing in for more expensive gemstones ranging from diamond to jade. But the incredible variety of quartz is now beginning to be appreciated in its own right.

Purple to violet amethyst and yellow to orange citrine are jewellery staples that continue to increase in popularity. Ametrine combines the appeal of both amethyst and citrine, purple and yellow in one gemstone. Different colours and types of chalcedony, from agate to chrysoprase, have grown in popularity with the growing appreciation for carved gemstones and artistic cutting and carving.

And unusual specialities like drusy quartz, with its surface covered by tiny sparking crystals, and rutilated quartz, which has a landscape of shining gold needles inside it, are adding variety and nature's artistry to unusual one-of-a-kind jewellery.

The pale pink colour of quartz, which can range from transparent to translucent, is known as rose quartz. The colour is a very pale and delicate powder pink. Transparent rose quartz is very rare, and usually so pale that it does not show very much colour at all except in large sizes. Translucent rose quartz is much more readily available, being used for beads, cabochons, carvings, and architectural purposes.

Smoky quartz is a brown transparent quartz that is sometimes used for unusual faceted cuts. The commercial market is limited, because there is a rather limited demand for brown gemstones. This variety was sometimes known as smoky topaz in the past, though the term is incorrect and misleading.

Tiger's eye quartz contains brown iron which produces its golden yellow colour. Cabochon cut stones of this variety show the chatoyancy (small ray of light on the surface) that resembles the feline eye of a tiger. The most important deposit is in South Africa, though tiger's eye is also found in Western Australia, Burma (Myanmar), India and California.

The transparent, colourless variety of quartz is still known as rock crystal. Long ago, people believed that rock crystal was a compact form of ice: in fact 'crystallos' means 'ice'. The best rock crystal has the clarity and shimmer of water. Although colourless quartz is relatively common, large flawless specimens are not, which is why crystal balls these days are made of glass, not quartz. Rock crystal has often been used in jewellery, particularly carved pieces.

Many stunning art deco jewellery designs featured the black and white quartz combination of rock crystal and onyx. Colourless quartz crystals have also become popular in jewellery due to the popularity of legends about their powers. Many people believe that wearing quartz crystals benefits their health and spiritual well-being.

While most varieties of transparent quartz are valued most when they show no inclusions, some are valued chiefly because of them! The most popular of these is known as rutilated quartz. Rutilated quartz is transparent rock crystal with golden needles of rutile arrayed in patterns inside it. Each pattern is different and some are breathtakingly beautiful. The inclusions are sometimes called Venus hair. Less well known is a variety called tourmalinated quartz which, instead of golden rutile, has black or dark green tourmaline crystals.

Quartz that is formed not of one single crystal but a number of finely grained microcrystals is known as chalcedony. The variety of chalcedonies is even greater than that of transparent quartz, including cryptocrystalline quartz with patterns as well as a wide range of solid colours. Agates are banded. Bloodstone has red spots on a green background. Moss agate has a plant-like pattern. Jasper sometimes looks like a landscape painting. Another staple of the jewellery industry is black onyx, chalcedony quartz which owes its even black colour to an ancient dyeing process that is still used today.

Carnelian, another chalcedony valued in the ancient world, has a vivid brownish orange colour and clear translucency that makes it popular for signet rings and seals.

Chrysoprase, a bright, apple-green, translucent chalcedony, is the most valued. It was a particular favourite of Frederick The Great of Prussia. It can be seen today decorating many buildings in beautiful Prague, including the Chapel of St Wenceslas. Today, chrysoprase is found mostly in Australia. Unlike most other green stones, which owe their colour to chromium or vanadium, chrysoprase derives its colour from nickel. Its bright even colour and texture lend themselves well to beads, cabochons, and carvings.