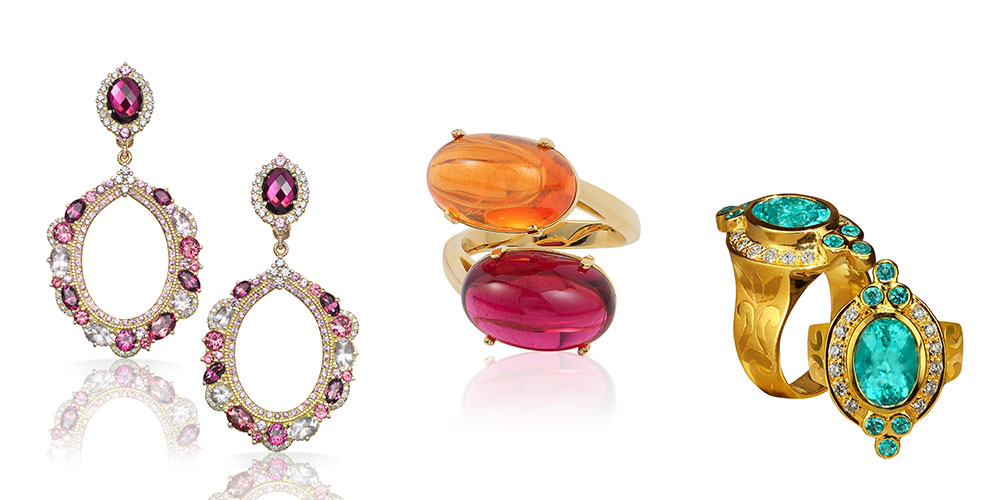 Tourmaline is available in more colors than any other gemstone, so it is fitting that it serves as the birthstone for October, when the seasons change in the Northern hemisphere and trees are alive with color. The ancient Egyptians attributed this profusion of colors to tourmaline’s long journey up from the center of the earth, during which it passed over a rainbow.

In addition to its status as the October birthstone, tourmaline is also the gem of the eighth wedding anniversary. The name comes from the Singhalese words “tura mali,” which translates to “stone with mixed colors.” It is the gemstone of love and of friendship, and is said to render the wearer’s relationships firm and long-lasting.

“Tourmaline is an incredible gem that comes in many unique colors, and I think that's why people like them so much,” says gem dealer Tracy Lindway of Gems by Nomads, New York City. “People can choose a gem in the precise color that speaks to them... and chances are their friends and neighbors won't have a stone in the exact same color. Tourmaline is a gem that really lets the wearer show his/her individuality,” says Lindway.

Tourmaline ranges from 7 to 7.5 on the Moh’s scale of hardness, which places it on the upper end of the hardness scale. As such, it is one of the most widely used gems, perfect in every season, in any kind of jewelry, including rings, since it is hard enough to take the rigors of daily wear.

Tourmalines in their various colors comprise a group of closely related mineral species that share the same crystal structure but have different chemical and physical properties. They all have silicon, aluminum, and boron, but derive color from other elements such as sodium, lithium, calcium, magnesium, manganese, iron, chromium, vanadium, fluorine and sometimes copper. The major tourmaline species are elbaite, liddicoatite, dravite, uvite, and schorl. Elbaites offer the widest range of gem-quality tourmaline colors. They can be green, blue, or yellow, pink to red, colorless or color-zoned. Even slight changes in the composition can cause completely different colors. 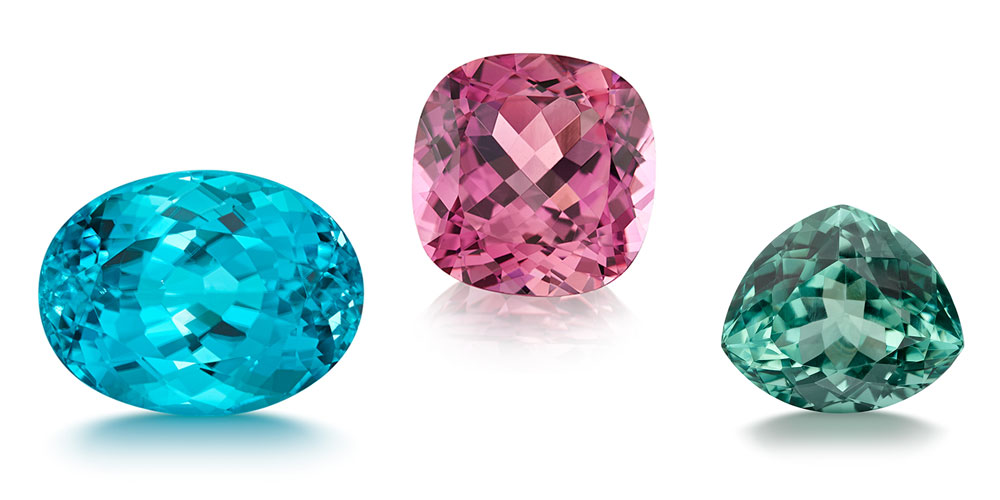 - Green tourmaline, called verdelite, is colored by iron or titanium in hues of green are more pastel than the deep, rich green of emerald or the softer hue of peridot. At its best, green tourmaline is transparent, brilliant and clean, with an attractive bluish green hue. The green comes from

- Pink tourmaline is colored by the trace element manganese. Yellowish-brown tourmalines are called dravites, and black ones are referred to as schorl.

- Rubellite is pink, red, purplish red, orangy red or brownish red tourmaline. It is as beautiful as ruby, but can only be called rubellite if it continues to display the same fine ruby red in artificial light as it does in daylight. If the color changes when the light source does, the stone is called a pink or shocking pink tourmaline.

- Chrome tourmaline is an intense green, colored primarily by a trace element called vanadium, the same element that makes Brazilian and African emeralds so beautifully green.

- Blue tourmaline is dark violetish blue, blue or greenish blue, and is known as known as indigolite or indicolite. The hue is often modified by green so you can have a blue color with just a little bit of green modifying color or a color that is very greenish but still blue.

- Cat’s-eye tourmaline is endowed with an effect called chatoyancy, and is most often green, blue, or pink, with an eye that’s softer and more diffused than the eye in cat’s-eye chrysoberyl.

- If a tourmaline crystal is almost colorless in the middle and black at the ends only, it is called a Mohrenkopf because it a type of cake with the same name popular in Germany – it is like a profiterole with cream in the center, surrounded by dark chocolate.

- Parti-colored tourmaline, gems with multicolored zoning, occur when the trace elements change in concentration or composition during a crystal’s growth. A crystal that starts off as pink, for example, might end up with a green tip.

- Sometimes a red crystal ends up with a green overgrowth, which dealers call watermelon tourmaline because their colors resemble the rind and flesh of that fruit. These are often cut in slices, rather than faceted, in order to exhibit the natural color zones.

- Paraiba tourmaline, discovered in 1987 at a mine in the Brazilian state of Paraiba, has become the most prized of all tourmaline colors because of its striking neon color and its rarity. Paraiba is an elbaite tourmaline, with large amounts of the trace elements manganese and copper. These elements cause colors that range from greenish blue, bluish green, green, blue, and violet hues. Although buyers covet all these colors, blue and violet have the most appeal. The gem’s unique, vivid coloring sets it apart from other tourmalines. Even prized rubellite reds and chrome greens do not reach the prices commanded by fine Paraiba. Because of its high value, Paraiba tourmalines are almost always custom cut. They are usually faceted into brilliant cuts, commonly pear and oval shapes. Paraíba tourmaline is rarely cut to sizes bigger than one carat. With Paraíba, however, color is the key factor, rather than size. A small, vividly colored stone has a greater value than a larger one of lesser color, all other factors being equal.

Purists say the only true Paraiba tourmaline is that which comes from Paraiba, Brazil, but it can also be found in Mozambique. “Brazilian stones are generally more expensive and have stronger color saturation, however they tend to be smaller, more included and harder to come by,” says Hubert Gesser of Hubert Gem, Los Angeles. “Mozambique stones tend to be cleaner, larger and lighter in saturation. Both can be beautiful.” Gesser acknowledges “there is disagreement within the trade on whether the non-Brazilian gems should be called Paraiba. Some believe only the stones from the state of Paraiba in Brazil can carry that name, while others believe that the term ‘Paraiba’ implies a specific color of primarily neon greenish blue, to stronger blues. Some labs describe the stones from Africa as: “copper bearing elbaite tourmalines, commonly referred to as ‘Paraiba’ within the trade, although the stones may not be from that location,” says Gesser.

Tourmaline can be found all over the world, but most is mined in Brazil and Africa. It can also be sourced in Afghanistan and nearby regions, and there are even some scattered mines in the U.S. In Africa it is mined in Mozambique, Zambia, Namibia, Madagascar and Nigeria. According to New York gem dealer Tracy Lindway, there is no one location where the “best” tourmaline is mined. “Each geographic source can produce both very fine tourmaline and lower grade tourmaline. I think it's most important to look at the individual stone and not the location it comes from to determine it's quality. By saying one source has the best tourmaline, we feed into the notion that location strongly effects value, when beauty should be the most important quality value of a stone.”

Even though tourmaline specimens can reach spectacular sizes, these are rare. Prices rise sharply for large sizes of facet-quality rough gems because they are rare. For fashioned gems of similar color and clarity, the price per carat generally increases as the gems pass the five-carat milestone.

“Given the correct geologic conditions, tourmaline can grow to very large sizes; this can happen in many different localities,” says Lindway. What tends to effect the sizes of gem Tourmaline coming to the market from a particular locality is the way they are mined. Many tourmaline deposits are primary hard-rock deposits (Namibia and Afghanistan) and require blasting/explosives to retrieve the stones; this may make it appear as though those areas produce smaller stones because many were broken in the mining process.”

Tourmalines grow in an environment rich in liquids, and some of those liquids are captured as inclusions during crystal growth. It’s not unusual for pink and red tourmalines to have eye-visible inclusions, but unless their size or number are distracting, they do not affect the value of the gem, especially if they have good color, which is considered the dominant value factor. Heavily included tourmalines with good color are sometimes cut as cabochons to emphasize the color and minimize the appearance of the inclusions. The elongated shape of many tourmaline crystals has a direct impact on the finished gem’s shape and proportions, resulting in long rectangle shapes. Making the cut parallel to the length of the rough crystal helps to reduce waste.

Tourmaline is also noted for an astonishing physical quality that is rarely cited in jewelry descriptions or lab reports: It can become electrically charged when it is heated. As it cools off, it releases a positive charge at one end and a negative one at the other, which causes it to oscillate. This is known as 'pyro-electricity', derived from the Greek word 'pyr', meaning fire. The Dutch, who were the first to bring tourmaline to Europe, were familiar with this effect a long time before it was given a scientific explanation. They used a heated tourmaline to draw up the ash from their meerschaum pipes, and called the gemstone “aschentrekker.”