The Traditional Birthstone for August

You don't need a special reason to wear the freshest summer color in the gemstone palette, but if you were born in August or if you are celebrating your 16th wedding anniversary, peridot carries special significance.

Peridot is the perfect gemstone for August. It is light and airy - call it "summery." Peridot adds the fresh look of summer to any outfit, particularly the bright pastels so popular on the fashion runways this season. Compared to more saturated tones like deep emerald or crimson ruby, there is an informality about peridot that adds to the lightness of the season. It is also more affordable than those gems.

That said, a large, highly-saturated peridot can be rare and expensive. Peridot is also the gemstone designated to celebrate the 16th wedding anniversary. But don't be restricted by these formalities - peridot is perfect any time!

Lush light green - a shade called "Green Flash" - was one of the top ten colors for Spring 2016 chosen by Pantone, the color trends forecaster and tracker. It calls on its wearer to "escape the mundane" says Pantone, and "is representative of nature's persistent influence, even in urban environments, a trend continuing to inspire designers." One such designer, Venezuela's Angel Sanchez, says he is "obsessed with lime green," referring to it as an "intense color for a sunny and cheerful spring.

The must-have item for Spring 2016 was a tea-length lime green textured organza strapless dress with dramatic folded pleats," he says. "It is couture, but at the same time very young." This is a perfect description for a beautiful, faceted peridot.

So just what is this beauty of a gem, and where does it come from? Gemologically speaking, peridot is the gem variety of the mineral olivine. The intensity and tint of the unique green color depends on how much iron is contained in the crystal structure, so the shade of individual peridots can vary from yellowish green to greenish yellow to brownish green. Peridot's color is an intrinsic part of its mineral structure and therefore always present. That means higher-quality stones have an especially vivid saturation.

This vivid saturation is part of the mythology of peridot. Ancient Egyptians called it the gem of the sun, and believed it glowed in the dark. Because of that, peridot has been credited with protecting its owner from "terrors of the night," especially when set in yellow gold.

Ancients strung peridot on donkey hair and tied them around their left arms to ward off evil spirits. And because it is a gemstone of lightness, it is said to counter the effects of negative emotions and bring inner peace. Now some of these mythologies sound pretty silly, but when you think about it, peridot really is a cheerful, light, summery gem, and so, it probably does have a kind of magic that counters negative emotions! Yes?

Historically, peridot was found in Egypt (specifically, St. John's Island - the Isle of Zabargad), and even Hawaii - where it was considered the goddess Pele's tears. (These sites are "uplifted mantle" - the building of an Island in the Red Sea, and volcanic deposits, as in the Hawaiian Islands and the green "sand" beaches.) Today, however, peridot is found mainly in other sites. 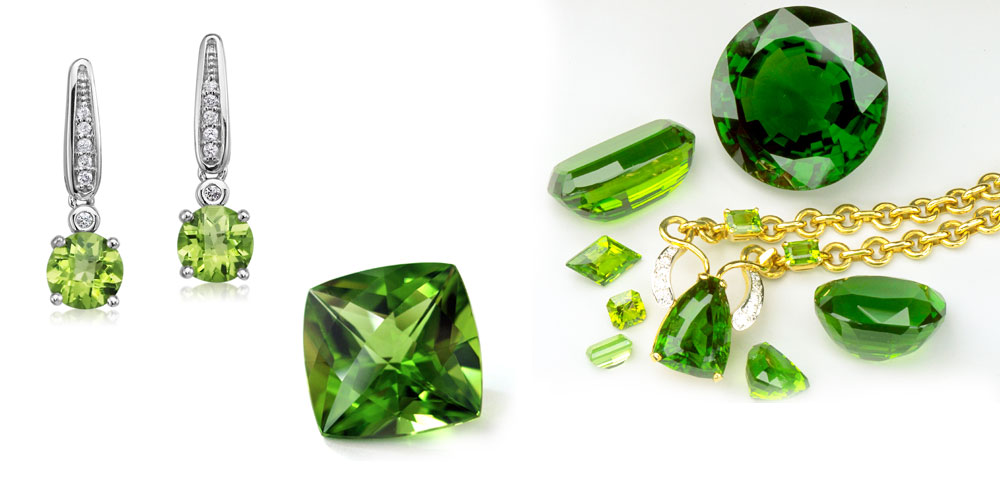 The largest and most beautiful samples of peridot come from the border area between Pakistan and Afghanistan. Peridot is also found in Myanmar, China, the U.S., Africa, Australia, and recently in Vietnam. Typical size range is from one to five carats. Large crystals of forsterite, the variety most often used to cut peridot, are not as common.

Stones from Myanmar are a vivid light to moderate green, with fine inclusions and a silky sheen. Peridot from Arizona, typically smaller than those from Myanmar, are also often a bit more yellowish or golden-brownish in hue. The United States, China, Australia, and recently Vietnam are producing the bulk of the material used in jewelry.

According to Heinz-Ulrich Mayer of August Mayer in Idar-Oberstein, Germany, the finest peridot comes from both Myanmar and Pakistan. "Some say Burma has better color," he says, "but I disagree. You can get the same fine color in Pakistan peridot. Myanmar stones generally have a 'silky' look to them as they have very fine silk-like inclusions. The Pakistan stones are more crystal."

Out of this World!

When talking about locality and formation, we would be remiss if we didn't tell you about peridot also coming from outer space! That's right, peridot is the ONLY wearable transparent gemstone that can come from somewhere beyond Earth. They are found in pallasitic meteorites (iron with olivine, called pallasites) that have landed on Earth, cut open to reveal gem peridot.

To emphasize where they are from, faceted pallasitic peridot are called "Palladot." Talk about unique! These small (usually less than one carat), typically brownish yellow-green gems are definitely for those who want something no one else has - and they are priced accordingly.

Large peridots have an amazingly vibrant (vivid and bright) color, and they have the power to make a dramatic statement in jewelry - as center stones in pendants or large drop earrings. Smaller sizes are no less beautiful when set in multiples, and are frequently used as accent stones. Peridot is usually cut in the traditional faceted shapes, classic table cuts, as well as cabochons, and beads.

If not properly cut, peridot can quickly look a tad washed out. However, in an effort to alleviate looking too pale, newer more modern cuts, cushions with checkerboard tops for example, can really boost peridots like-ability.

Briolettes are the almost forgotten classic shape, faceted teardrops, which really intensifies the color and brilliance of a peridot. They are perfect for earrings, or a statement necklace, or even a fabulous gem-dangled bracelet.

Peridot is a 6.5 to 7 on the Mohs scale of hardness, so it is not the most scratch-resistant gem - compared to sapphire and ruby, at 9, or spinel at 8. Still, peridot is not at the bottom of the hardness list, and it is reasonably tough, although probably should not be worn every day; it can take a few soft knocks, and is therefore perfectly suitable as a center stone in a ring. However, they really shine through in statement earrings, especially combined with other gemstones.

To keep peridot clean, peridot shouldn't be put in a steamer or ultrasonic bath, as any good jeweler would know, nor should you wipe a dry peridot, which could eventually dull its luster. Soap and water will do very nicely, and make certain the gem is washed clean of dust before wiping. Treat your peridot with care, and it will look beautiful for years to come.

The largest cut peridot olivine is a 311.8-carat specimen in the Smithsonian Institution in Washington, D.C. 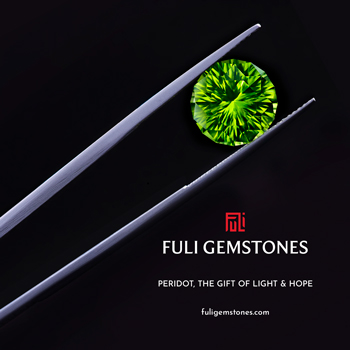