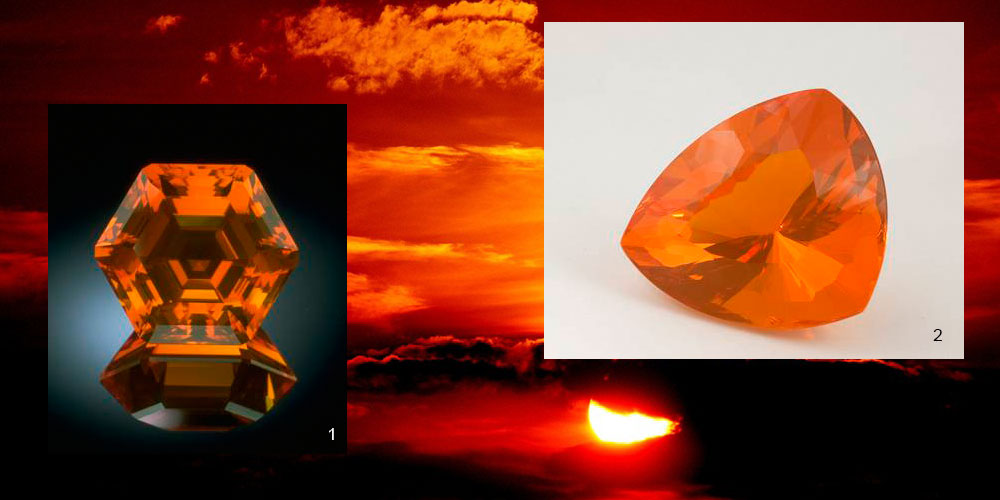 They were already admired as symbols of the most fervent love in ancient times, in India and in the ancient Persian kingdom, and among the peoples of Central America and the Amerindians. It was believed that a gem that bubbled over with vivacity to such an extent as the fire opal could only have been created in the waters of paradise. The Mayas and Aztecs loved this gemstone and liked to use it in mosaics and for ritualistic purposes.

They called it quetzalitzlipyollitli, the 'stone of the bird of paradise'. Yet one day, the gemstone knowledge of Mexico's natives, which had been handed down from generation to generation, somehow sank into oblivion for a long time ...

... until, in or around the year 1835, the fiery treasures hidden in the Mexican highlands were remembered, and work was gradually begun on the systematic mining of the places where they had been found. Today, the fire opal is regarded as the national gemstone of that country.

It is in Mexico that the most significant fire opal deposits in the world lie. Rock strata containing opals run through the Mexican highlands, with their many extinct volcanoes. With a few exceptions, the gemstone, which lies hidden in cavities and crevices, is extracted in open-cast mines, the work giving rise to impressive canyons with walls up to 60 metres high and labyrinthine passages which wind their way through the mining areas.

Sometimes, these orange-red gemstones are also found in other countries, in Honduras or Guatemala, in the USA, Canada, Australia, Ethiopia and Turkey, but these are mostly sites of little or no economic significance. With Brazil it is a different matter.

Several years ago, in an agate mine near Campos Borges in the South Brazilian State of Rio Grande do Sul, fire opals coloured yellow to orange were discovered. They distinguish themselves by their beautiful colour, often with slight clouding, but without play of colour. Their warm, expressive orange comes in all varieties from yellow to light red, sometimes with a brownish undertone. What is particularly remarkable is the sheer size of the raw stones.

Some of them are as big as a man's fist, which opens up completely new possibilities in the way they can be worked. Today, these Brazilian fire opals are setting new trends in the fascinating world of gemstones.

A powerful gemstone with a vivacious colour

The fiery, warm glow of the fire opal beguiles jewel enthusiasts the world over. This radiant orange simply cannot be overlooked! The fire opal, which, like the other opals, consists of silicic acid with a relatively high water content, was named for its colour.

The colour itself comes from fine traces of iron oxide. With a hardness of between 6 and 6.5 on the Mohs scale, however, the fire opal is among the somewhat sensitive gemstones which require a protective setting, especially when worn as a ring stone.

Not all fire opals are the same. We differentiate between the common fire opals, which, depending on their quality, are either faceted or cut into cabochons, and the especially valuable ones, which, in addition to their vivacious colour, also have the gaudy play of colour typical of opals. But with or without play of colour, the fire opal plays its part as a top quality gemstone to perfection.

Even those who prefer not to subscribe to the energies in gemstones and the forces which emanate from them will undoubtedly get a feeling of warmth and well-being when they look at a fire opal. In gemstone therapy, opals are generally regarded as gems which people choose intuitively when they are working on a particular aspect of their personality. Seen like this, the fire opal is a good means of helping to make feelings flow and resolve blockages.

Connoisseurs say that fire opals bestow courage, stamina, will-power and energy on the wearer. Thanks to their force they disperse old, long outdated ways of thinking and make room for new ones. The warm, fiery orange-red has a positive effect on the psyche and conveys a profound sensation of warmth, peace and harmony. The fire opal is the lucky stone of those born under the sign Aries.

The drier the place where it is found, the more durable the fire opal

Fire opals are either faceted - that is, as far as their transparency allows - or cut as a cabochon, since this is the shape which best brings out the rich glow of this orange jewel. It is the oval which is regarded as the classical shape for valuable fire opals. Brazilian raw stones, however, are also cut into many other imaginative shapes, their sheer size giving cutters and gemstone designers almost unlimited freedom for both work and play.

In spite of their relatively low hardness, opals are not actually that easy for the cutter to work with. When setting up the cut, he must pay attention to the direction in which the stone shows its play of colour to the best advantage. When working on the raw stone, the cutter - and later the setter - must take care to ensure that the gem does not come into close contact with great heat, since the water content of the fire opal is unevenly distributed and the stone can crack if dried artificially.

Indeed, when the raw stones are found, many fire opals are covered in a chalky white weathering crust, a sign that the stone has aged through loss of water and become cloudy and cracked. Whether and to what extent a fire opal is susceptible to this ageing process is not only dependent on how it is handled, but also has to do with its origin.

But an experienced gemstone specialist can judge by where it was found whether a fire opal is going to be durable or not. Having a very precise knowledge of the places where their stones are discovered, opal specialists are able to answer for their durability. One rule of thumb goes: the drier the place where it was found, the more durable the opal.

The tolerance of the fire opal to extreme heat is just as poor as its resistance to acids, alkaline solutions and sharp objects. Very unfavourable conditions compel the opal to surrender its moisture, which can make it cloudy and cracked.

Like all opals, it should not be exposed to intense light over long periods. However, it loves to be worn a lot, since this enables it to maintain its water balance, using the moisture of the wearer's skin and that of the air. Having said that, it should be protected against contact with cosmetics. Fire opals which have become matt through being worn a great deal can be repolished.

A gemstone for people with a positive approach to life

Play of colour, body colour and transparency are the three criteria which determine the price of a fire opal. The more transparency and 'fire' it has, and the more intense the deep red of its body colour, the more valuable it will be. The rarest, and thus the most highly esteemed, is the intense red-orange fire opal from Mexico with its strong play of colour.

A higher value is placed on fine cabochons with the much loved typical play of colour of the opals than on good, faceted fire opals. These gems, which glow from orange to red, are treasures which appeal most of all to active people with a positive approach to life. Their warm, fiery colour gives us vigour, fills us with the joys of life and opens our senses to the beauty of Nature.

After all, fire opals are themselves a piece of Nature in its most beautiful form.