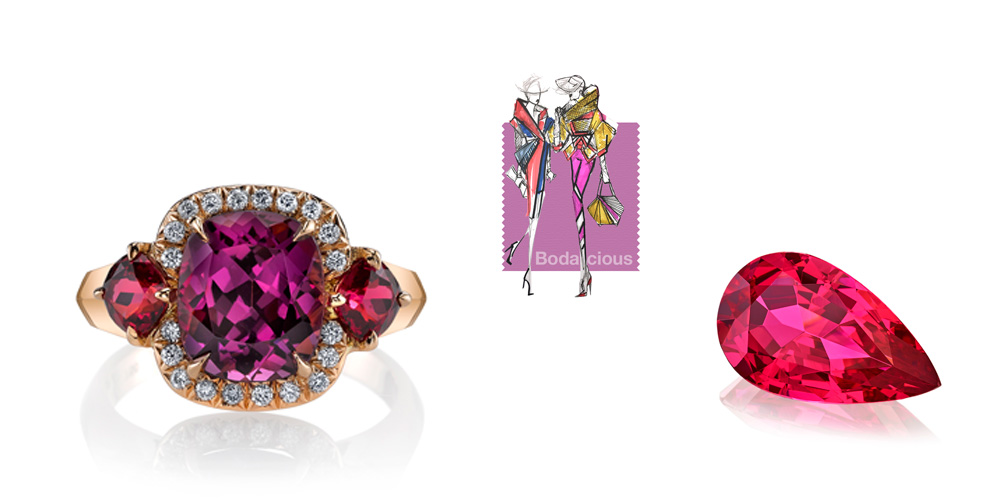 Stepping into the spotlight as an August birthstone, spinel is energizing a new generation of gem aficionados with fresh color choices and meaningful ways to celebrate life.

Spinel, a gem that has historically been mistaken for other colored gemstones, most notably ruby, is making history in its own right in 2016, joining the official list of birthstones as an additional gem choice for the month of August.

Jewelers of America, which established the modern birthstone list in 1912, is leading the public relations and marketing campaign, along with AGTA (see above) to celebrate August birthdays with spinel. This marks the third update to the list, with alexandrite (June), citrine (November), tourmaline (October) and zircon (December) added in 1952, and tanzanite as an additional December gem listed in 2002.

This is exciting news for a gem that has become more than a collector's favorite, with spinel's popularity surging among bespoke jewelry designers and luxury brands inspired by its great brilliance, and range of spectacular colors.

"Spinel comes in almost all colors of the rainbow and a wide range of hues. Driving the demand is their brilliance, color and price point," describes New York designer Bella Campbell. "These outstanding gems are my first choice as an artist who designs one-of-a-kind pieces with center stone spinels by itself or in combinations with other gems."

Los Angeles designer Niveet Nagpal for Omi Privé believes spinel is underappreciated and deserving of the spotlight, having stayed in the shadows of ruby and sapphire historically. "Hopefully with spinel becoming an official birthstone it will get the much-needed exposure it deserves."

Not correctly identified until the late 1700s, spinel was often mistaken for corundum. Hailed the great imposter, almost all historical large red gems in crown jewels and religious regalia are not ruby but actually spinel, referred to as either balas ruby or spinel ruby. Among the most famous is the Black Prince's Ruby, a stunning, 170-carat red spinel, a semi-polished octahedron (octahedron being the classic rough crystalline shape for spinel) that adorns the Imperial State Crown of England, mounted just above the 317.4-carat Cullinan II diamond.

Another example is the Timur Ruby, a 352-carat spinel currently in the private collection of jewels owned by Queen Elizabeth II, which has the names of all the Mogul emperors who previously owned it engraved on its face.

What's in a Name?

The name spinel may have been derived from the Greek word "spitha" meaning spark or perhaps "spinthir" meaning scintillate. These are only two of numerous plausible name origins, but since faceted spinels are strongly dispersive and typically more scintillating than ruby, one could easily see how its name might have Greek origins. Considering the healing powers of spinel, spark and/or scintillate is exactly what this high-energy gem is believed to do in rejuvenating and revitalizing the mind, body and soul.

Associated with the root chakra, spinel is grounding and energizing, establishing the deepest connections with your body, your environment, and the earth. "I am so excited that spinel is getting so much love these days," praises Seattle designer Shamila Jiwa. "With its range of colors and being a talisman of protection, who wouldn't want a striking piece of spinel jewelry to call their own?" A fashion friendly gem with good karma --that's a win-win! 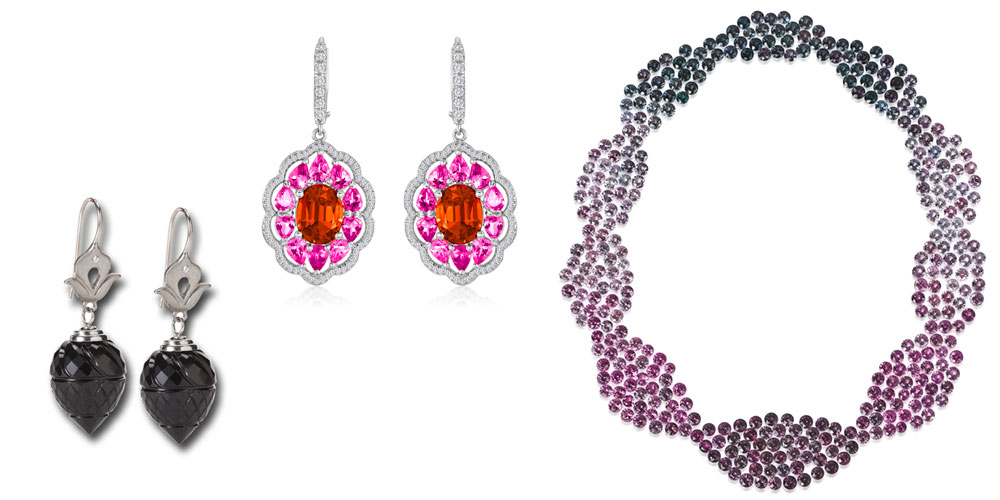 Spinel is a transparent to opaque gem, with colors as vivid as ruby-like reds, some darker "brick" red, and some almost orange. Spinel comes in blue, with the finest stones comparable to that of sapphires, and considered extremely rare. Most blue spinels are deep in color tending towards gray, and some with a violet tinge. Spinel also occurs in shades of yellow, some incredible pinks, lavenders, purples, and blue-greens. Spinel gives you the opportunity to get the guys interested in gem-set jewelry too. Black spinel seems to be quite popular in jewelry for both men and women.

The fabulous range of colors in spinel is due to the presence of trace elements. Red is produced when chromium replaces aluminum, and for blue color, iron and sometimes cobalt is present. Of course, the more coloring agent (trace elements), typically the more saturation. Cobalt blues are especially nice and vivid - rare and priced accordingly.

Most NATURAL spinel now is very affordable, and tends to have fewer inclusions when compared to ruby or sapphire of similar size, quality and color. But when spinels do have inclusions, look carefully. Sometimes, these inclusions form a pattern, one that resembles a human's fingerprints; a swirling design made up of tiny octahedral crystals. Very cool!

Because of the nature of the rough, the most common cut for spinel is round and cushion, but it is also crafted in other classic shapes like emerald cuts and trilliants.

A durable gem for jewelry, spinel ranks an 8 on Mohs scale of hardness. This is terrific for center stone rings. Spinel is very durable (which is another reason they used the synthetic spinel - same hardness - in high school and college class rings!).

Keeping it clean is simple. Wipe clean with a gem cloth, or just brush with soapy water or commercial jewelry solution, using a soft bristle toothbrush.

Where do They Come From?

The two best-known historical sources for spinel are Burma and Sri Lanka, but the gem is also found in Vietnam, Madagascar, Tanzania (Mahenge and Tunduru), Tajikistan and Mozambique (new).

In fact, one of the main the reasons for spinel becoming a birthstone, is its availability. And the surge in availability is due in part to the new production from Vietnam and Tanzania. These new deposits are providing the market with dreamy colors that speak to the latest Pantone palette in hues from Rose Quartz and Lilac Gray to Bodacious purple and Riverside blue.