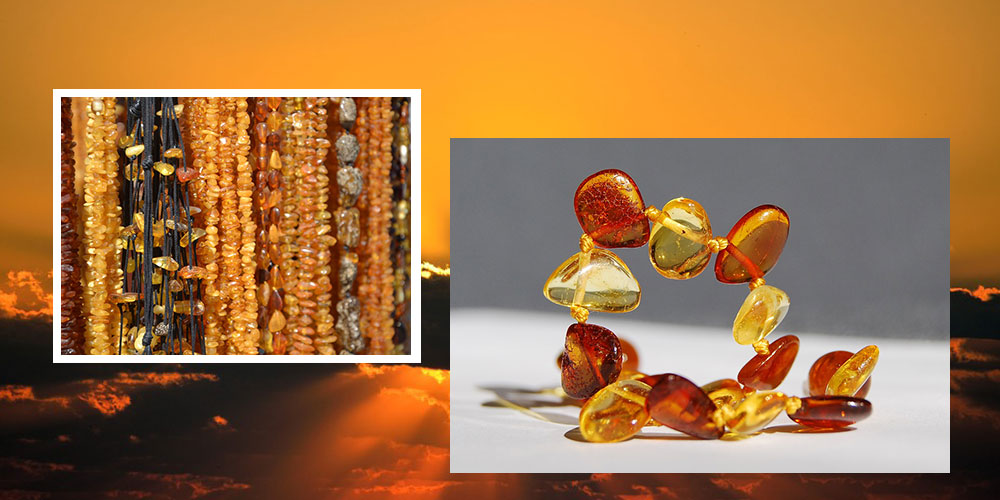 Dinosaurs have been more popular than ever since their starring role in the film Jurassic Park. A more surprising result of the film's popularity has been a worldwide surge in demand for amber jewellery.

Although amber's use in adornment is probably as old as mankind itself, in recent times it has had a limited market. Of course, that was before millions of people saw dinosaur DNA extracted from a mosquito trapped in amber in the film.

Millions of people learned from the film that amber, which is fossilised pine tree resin, is ancient and valuable, like an antique from history.

Demand is especially strong for amber with insects inside it. "Amber is like a time capsule made and placed in the earth by nature herself," said David Federman, author of the Consumer Guide to Colored Gemstones. "It has helped paleontologists reconstruct life on earth in its primal phases. More than 1,000 extinct species of insects have been identified in amber."

The two main sources of amber on the market today are the Baltic states and the Dominican Republic. Amber from the former is older, and thus preferred on the market, but that obtained from the latter is more likely to have insect inclusions. Amber prices can range from $20 to $40,000 or more.

Fortunately for new amber enthusiasts, amber from the Baltic states is more widely available on the market than it was in previous years thanks to the liberalisation of the economies of Eastern Europe and the former Soviet Union. The largest mine in the Baltic region is in Russia, west of Kaliningrad. Baltic amber is found in Lithuania, Latvia, Estonia, Poland, Russia, and occasionally washed up on the shores of the Baltic Sea as far away as Denmark, Norway, and England. Other amber sources include Myanmar (formerly Burma), Lebanon, Sicily, Mexico, Romania, Germany, and Canada.

The desire for amber is nothing new. Amber artefacts dating back to the Stone Age have been found in what is now Germany and Denmark.

Made by the sun

"Stone Age man imbued amber with supernatural properties and used it to wear and to worship," says Mr Federman. "Amber took on great value and significance to, among others, the Assyrians, Egyptians, Etruscans, Phoenicians and Greeks. It never completely went out of vogue since the Stone Age. Between 1895 and 1900, one million kilograms of Baltic amber were produced for jewelry."

There are many myths surrounding the origin of amber. Ovid wrote that when Phaethon, a son of Helios, the sun, convinced his father to allow him to drive the chariot of the sun through the heavens for a day, he erred too close to the earth, scorching it. To save the earth, Zeus struck Phaethon with a thunderbolt and he died, plunging out of the sky. His mother and sister turned into trees in their grief but still mourned him. Their tears, dried by the sun, are amber.

The Greeks called amber 'elektron', sun-made, perhaps because of this story, or perhaps because it becomes electrically charged when rubbed with a cloth and can attract small particles. Homer mentions amber jewellery - earrings and a necklace of amber beads - as a princely gift in the Odyssey.

Another ancient writer, Nicias, said that amber was the juice or essence of the setting sun congealed in the sea and cast up on the shore.

The Romans sent armies to conquer and control amber-producing areas. The Emperor Nero was a great connoisseur of amber. During his time, according to the Roman historian Pliny, the price of an amber figurine, no matter how small, exceeded the price of a healthy slave.

The ancient Germans burned amber as incense, so they called it 'bernstein', or 'burn stone'. Clear colourless amber was considered the best material for rosary beads in the Middle Ages on account of its smooth silky feel. Certain orders of knights controlled the trade, and unauthorised possession of raw amber was illegal in most of Europe by the year 1400.

So could a mosquito trapped in amber really contain dinosaur DNA? Most amber just isn't old enough, having had some 25 to 50 million birthdays at the most. The dinosaurs died out 65 million years ago at the end of the Cretaceous Period. The Jurassic period was 144 million years ago. But in 1994, Dr Raul Cano of California Polytechnic State University at San Luis Obispo, a molecular biologist, reported in the British journal 'Nature' that he and his colleagues had extracted DNA from a weevil that was trapped in amber 120 to 135 million years ago, when dinosaurs did indeed roam the earth.

The amber, which was from the Lower Cretaceous period, was mined in the mountains of Lebanon south of Beirut by Aftim Acra, who has a collection of amber pieces containing 700 insects, including termites, moths, caterpillars, spiders, pseudoscorpions, and midges, which do, after all, suck their host's blood.