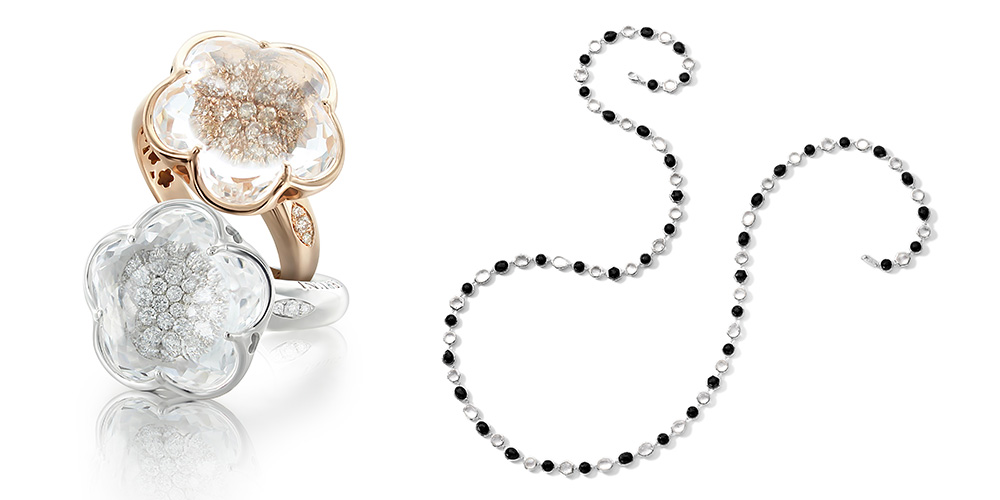 In ancient times, clear quartz, which is called rock crystal, was used to carve crystal balls, and people believed they could see into the future by gazing into them. This illusion was probably related to the fact that the crystal ball reflected a distorted image of the gazer, but the gem has been steadfastly equated with magical, mystical properties throughout the ages, right up until modern times. Wearing quartz crystals has been associated with balance, clarity and energy, and credited with benefiting overall health and spiritual well-being.

Wearing, carrying or meditating with a clear quartz crystal is said to open the mind and heart to higher guidance, allowing the realm of spirit to be transmitted and translated into the world of physical form. This is perhaps why it has often been worn in jewelry, where it can be kept close to the body, where it has the power to enhance the inner spirit as well as the outward appearance of its wearer.

Quartz is the chameleon of all gemstones. Depending on the geological factors contributing to its formation and the impurities present in the crystals, gem quality quartz can be found in more than a dozen different colors and varieties. Many of these are known by names other than quartz: citrine, amethyst, chrysoprase, onyx, chalcedony and more.

All are silicates, the largest of all mineral groups, and composed of one part silicon and two parts oxygen. The name quartz stems from the German quarz, derived from the Slavic word kwardy, meaning “hard” – it is a sturdy 7 on the Moh’s scale, which puts it just behind sapphire in terms of hardness. It is tough and durable, and therefore usually accepts a brilliant polish.

Image: Bangles and rings with assorted gemstones, including clear quartz crystal, by Alex and Ani.

Colorless quartz is called rock crystal quartz. The word “crystal” comes from the Greek krustallos which means “ice crystal,” because they thought quartz crystals were pieces of ice that were frozen so deeply they couldn’t melt again. The best rock crystal has the clarity and shimmer of water, and it has been used throughout history to carve decorative objects and bowls. Today more often seen set into jewelry, where it is appreciated for it’s pure, unclouded transparency and its accessiblity compared to other gemstones.

Many stunning Art Deco jewelry designs featured the black and white combination of rock crystal quartz and onyx. Today, it is part of a trend in jewelry toward the use of doublets, with rock crystal being placed over colored gemstones, for a hazy gem-in-a-goldfish-bowl look. Rock crystal has also been extensively used in carvings such as vases, candlesticks and paperweights.

Colorless quartz objects carry a certain cachet because of the many legends about their powers.

Quartz is present and plentiful in all parts of the world because it forms at all temperatures and is abundant in igneous, metamorphic and sedimentary rocks. Clear rock crystal quartz is found in the U.S., Brazil, Russia and Madagascar. Rock crystal often has inclusions of other minerals and these inclusions sometimes produce popular sub-varieties of ornamental stone. Golden rutile inclusions, for example, produce a unique stone aptly named rutilated quartz.

Aside from quartz’s magical, mystical properties, it also has some pretty conclusive scientific powers. If you squeeze a crystal of quartz, it generates a tiny electric current. The pressure on the crystal’s surface forces ions within it to move out of position, upsetting the overall charge balance and turning the crystal into a tiny battery, with oppositely-charged faces.

This phenomenon is known as the piezoelectric effect, and it also works in reverse. Pass an electric current through a quartz crystal, and it will squeeze itself. Quartz watches use tiny slivers of cut quartz as oscillators to keep precise time.

Electricity from the watch battery causes the crystal to oscillate thousands of times per second, and circuits in the watch convert these oscillations to a once-per-second digital beat. This phenomenon completely transformed the watch industry when it was introduced in the 1970s.

Rock crystal may be said to be associated with new beginnings. It is the birthstone for April, when signs of spring begin to emerge, and the gemstone associated with Monday, the beginning of the work week. It is, perhaps, a harbinger of all things possible.