A rosy outlook! Rose quartz is more than just the January birthstone 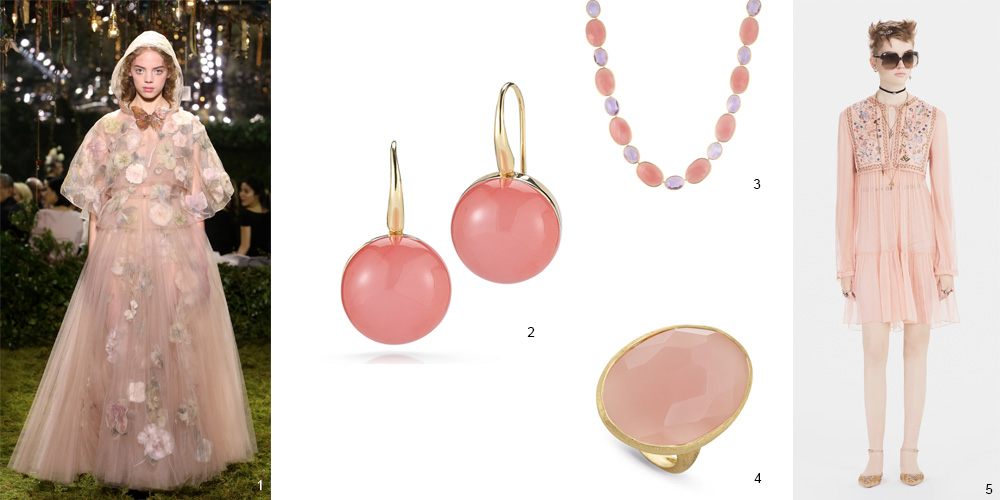 Rose Quartz is in Fashion!

Rose Quartz is having a moment of glory in the jewelry world, and its popularity seems to be here to stay.

In 2016, the Pantone Color Institute named it one of its top two colors of the year, along with “serenity,” a light blue shade. Rose Quartz has endured as a top fashion color well into 2017, and it remains on the list of Pantone’s top ten colors for 2017 – it is also referred to as “dusty spring.”

The fashion world abounds with praise for pink. A recent article on fashionista.com says, “you would have to be colorblind to question whether we are knee-deep in a Rose-Quartz-everything era.” The story predicts the color will be around for some time. The fashion section of The New York Times proclaimed, “The high fashion world is cringing as its favorite black is pushed aside by the mass success of pink.” 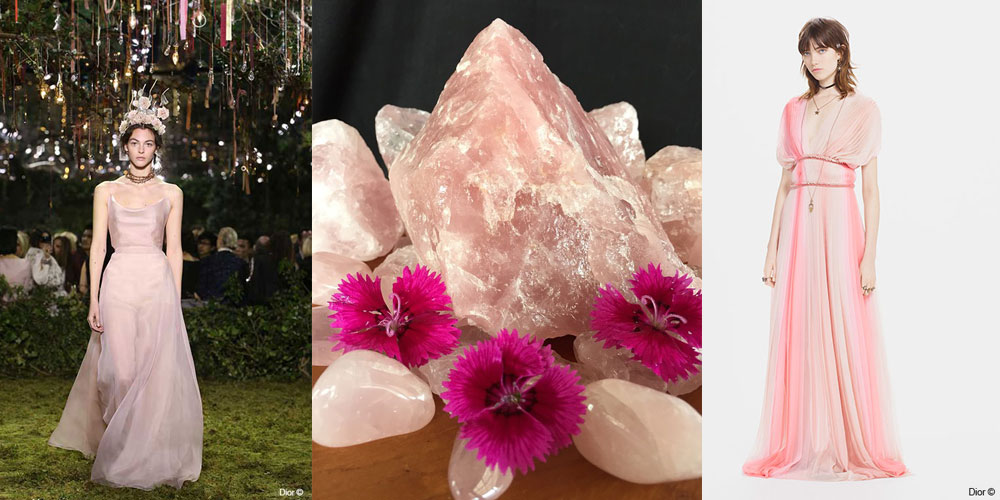 The Allure of Rose Quartz

All of this publicity is boosting the reputation of Rose Quartz, which was long overlooked in favor of more saturated colored gemstones. Of course, it isn’t the only pink gemstone out there, but compared to most, including, Pink Sapphire, it is certainly the most affordable. Morganite also enjoyed a moment due to the popularity of pink, and it is more transparent than Rose Quartz, with a higher color saturation.

However, its price has recently soared. According to Bangkok gem dealer Navneet Agarwal, from Navneet Gems, the demand for Morganite resulted in a surge in price that has people turning to Rose Quartz instead. “Morganite [a pink variety of beryl] has been hot the past few years, because of its color and because it was named after [financier] J.P. Morgan,” he says. “But because of its surge in popularity, the price shot up.” This, he says, paved the way for the demand for Rose Quartz, which is priced reasonably for standard sizes.

Rose Quartz has a comparable pink color, but softer and more cloudy in appearance than Morganite – something that is preferred in jewelry at the moment. Softer tones of other gems, such as Amethyst, are also on trend. Rose Quartz is also slightly softer than other pink gems – 7 on the Moh’s scale compared to Morganite’s 7.5 to 8 and Pink Sapphire’s 9 – but it is more abundant, which makes it more affordable, and it is a beautiful gemstone in its own right.

Quartz, a Favorite of Jewelry Designers

Quartz is the chameleon of all gemstones. Depending on the geological factors contributing to its formation and the impurities present in the crystals, gem quality Quartz can be found in many different colors and varieties. Many of these are known by names other than Quartz: Citrine, Amethyst, Chrysoprase, Onyx, Chalcedony and more. 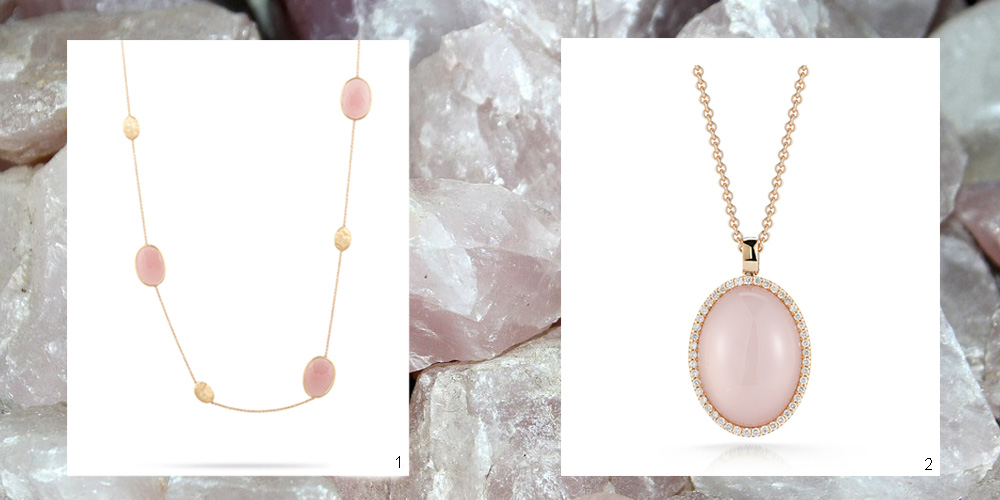 In terms of lore, Rose Quartz is the gemstone of love. It is believed to promote romantic love, fertility, sexuality and energy. Wearing it is said to relieve anger, tension, guilt grief and fear, making the wearer look years younger. It dispels negativity, promotes calmness and reassurance, reduces high blood pressure and speeds overall healing.

In addition to being a January birthstone, Rose Quartz is also the gemstone of the fifth wedding anniversary.

Rose Quartz has a delicate pink color that ranges from nearly white to a deep rose-pink. Microscopic mineral inclusions give it a cloudy translucence, however, and it is rarely highly saturated. The most appealing color typically occurs in larger sizes, and small Rose Quartz specimens with good color tend to be rare. Cutters can intensify the delicate color by applying concave facets to gems in larger sizes. Occasionally a star pink Quartz is found, when inclusions of rutile are dense enough to create a weak six-rayed star phenomenon.

Fully transparent pink Quartz is rare; the gems are usually cloudy and pale except in large sizes, so they are generally used for beads, cabochons and carvings rather than cocktail rings or pendants. In ancient times, Rose Quartz was used to carve crystal balls: perhaps to induce a rosy outlook?

Quartz is a member of the silicates, the largest of all mineral groups, and is composed of silicon and oxygen. The name stems from the German Quarz, which in turn comes from the Slavic word kwardy, meaning “hard.” Rose Quartz is found in rock formations called pegmatites, an igneous rock composed of interlocking crystals.

It is sourced in Madagascar, India, Sri Lanka, Russia, and in the U.S. state of Maine, but the finest specimens are mined in Brazil. In the Brazilian state of Minas Gerais, there are deposits of what some in the trade call pink crystalline Quartz, which is more deeply saturated and more transparent than its sister, Rose Quartz. Pink Quartz is found in the vein systems inside phosphorus-rich pegmatites and has a slightly different origin and composition of trace elements.