Tanzanite is an extraordinary gemstone 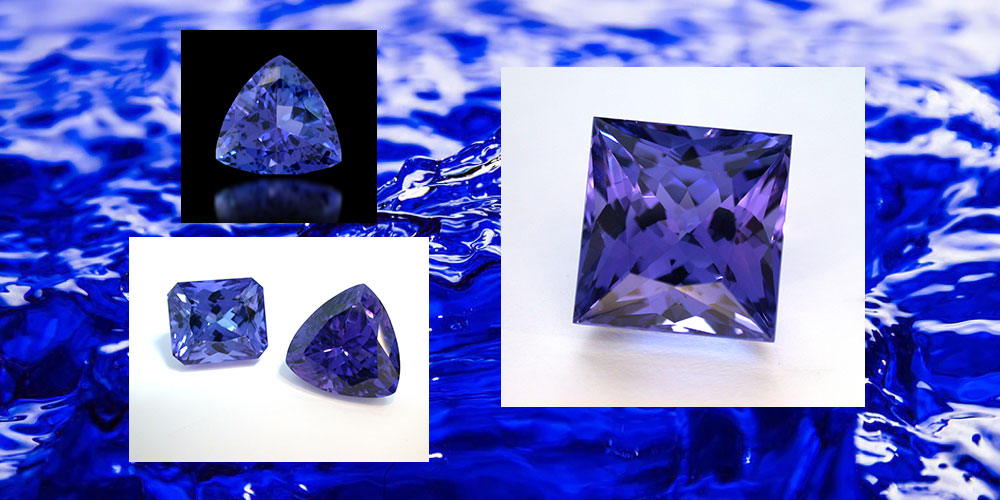 It occurs in only one place worldwide. Its blue, surrounded by a fine hint of purple, is a wonderful colour.

Thanks to its unusual aura and the help of the New York jeweller Tiffany & Co., it has rapidly become one of the most coveted gemstones in the world.

It is named after the East African state of Tanzania, the only place in the world where it has been found. Africa? Does anyone think of gemstones when they hear that name? Well they should, because Africa is a continent which provides the world with a multitude of truly magnificent gemstones, like tanzanite for example. On its discovery in 1967, it was enthusiastically celebrated by the specialists as the 'gemstone of the 20th century'. They held their breath in excitement as they caught sight of the first deep-blue crystals which had been found in the Merelani Hills near Arusha in the north of Tanzania.

Millions of years ago, metamorphic schists, gneisses and quartzites formed impressive, flat-topped inselbergs on a vast plain in the shadow of Kilimanjaro. The precious crystals grew in deposits on the inside of these unusual elevations. For a long, long time they were hidden from the eye of Man, until one day some passing Masai shepherds noticed some sparkling crystals lying in the sun and took them along with them.

In Merelani today, the search is carried on for the coveted crystals in several, smallish mines, in some cases using modern methods. As a rule, only small grains are found, but now and again the mineworkers succeed in fetching out a larger crystal – to the joy of the mine owners and that of the large number of tanzanite fans.

The tanzanite trade is in the hands of many licensed merchants, mostly on a small scale, who have, over the decades, built up stable, trusting business relationships with gemstone companies in India, Germany, Israel and the USA. An estimated 90 per cent of all tanzanite merchants are official members of the International Colored Gemstone Association ICA, and are thus bound by the high ethical standards of that organisation. In this way, this exclusive gemstone is not subject to trade via dubious channels, but instead, in spite of its rarity, passed on along reputable trade routes to established cutting-centres and subsequently to major jewellers all round the world.

Tanzanite is a blue variety of the gemstone zoisite. It consists of calcium aluminium silicate and is not particularly hard, having a value of 6.5 to 7 on the Mohs scale. For that reason, it should always be worn carefully and never placed in an ultrasonic bath for cleaning or brought into contact with acids.

When the first tanzanites were offered by geologist and miner Campbell R. Bridges to the New York jeweller Tiffany & Co. a short time after their discovery, they sparked an enthusiastic reaction. 'This gemstone is a sensation!', they said. However, they did make a recommendation to give the 'child' another name, since the gemmologically correct name 'blue zoisite' was felt to be too close to the English word 'suicide'. So Tiffany's proposed the name 'tanzanite', after the place where the stone had been found - a name which quickly came into general use in the trade. And it was Tiffany & Co. who, two years after its discovery, presented this exclusive gemstone to the general public with a broad-based advertising campaign.

... but what a fantastic colour!

The deep blue of tanzanite is fantastic, and runs from ultramarine blue to light violet-blue. The most coveted colour is a blue surrounded by a delicate hint of purple, which has a particularly wonderful effect in sizes of over 10 carats. The well developed polychromaticity of tanzanite is typical: depending on the angle from which you look at it, the stone may appear blue, purple or brownish-yellow. Having said that, most raw crystals are somewhat spoiled by a brownish-yellow component, though it can be made to disappear by the cutter if he heats the stone carefully in an oven to approximately 400-600°.

During the procedure he must pay careful attention to the moment at which the colour turns to blue. This burning is a method of treatment which is regarded as customary in the trade, but the raw stones must be as free of inclusions as possible, since otherwise fissures may occur. In fact, working with tanzanite can sometimes give even the most experienced cutter a bit of a headache, the cleavage of this gemstone being very pronounced in one direction. This exclusive gemstone is cut in every imaginable shape from the classical round shape to a number of imaginative designer cuts.

A tanzanite will continue to fascinate with its unusual, captivating aura. Its deep blue with the slightly purple tinge is one of the most extravagant colours known to Man. It personifies immaculate, yet unconventional elegance. A person who acquires one of these exclusive gems is someone who wishes to set himself apart from the hoi polloi. A person who wears it exudes confidence and individuality. The almost magical colour of a perfectly cut tanzanite is one that not only suits confident young women; it is also excellently suited to underlining the individuality of the more mature woman.

In the meantime, almost any price you care to name is being asked - and paid! - for tanzanites of good quality and large size. What makes this stone so popular? Is it simply that fantastic colour? No, it is also the exclusivity of its origin. The stone is particularly highly prized because it is found in only one place in the whole world. The idea of possessing something that not everyone has, has always been one of the main criteria in the way we esteem special gems.