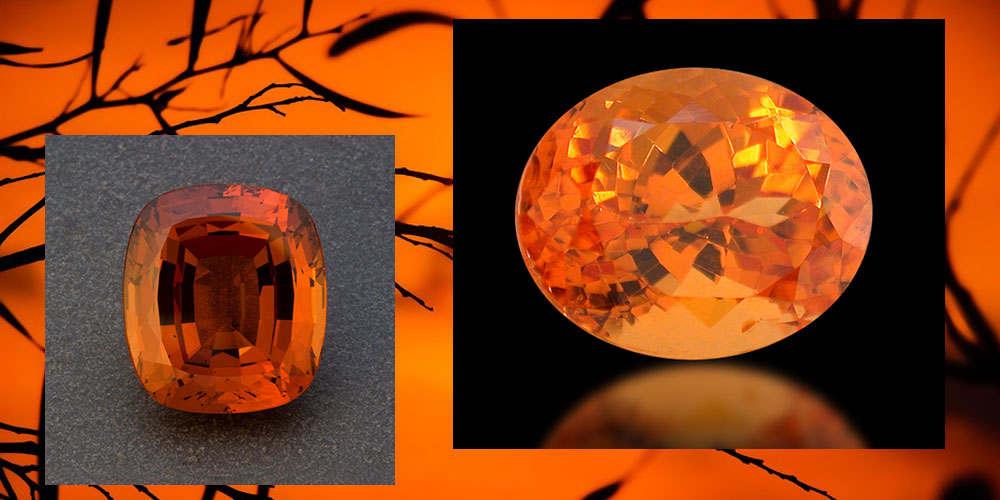 Like fiery comets against the evening sky, the first mandarin garnets appeared in the gemstone trade some decades ago.

Specialists and gemstone lovers all agreed: the magnificent colours and high brilliance of these orange-red treasures are unique. So what kind of gemstones are they, and where do they come from?

Close your eyes and dream a little: Africa

In the north-west of Namibia, the evening sky glows orange-red over quiet hills and a solitary river. The next settlement is some nine hours away by car. Temperatures here are extreme: in summertime they rise to between 40 and 50 degrees Celsius, and in winter they drop almost to freezing-point.

Here, far away from civilisation of any kind, the Kunene River has been winding its way through the hills along the border between Namibia and Angola for centuries. At this remote spot, one of the last untouched places on Earth, the first mandarin garnets were discovered in 1991.

Embedded in mica and mica schist where they had come into being millions of years before, small crystals of an unusual coour and transparency were discovered, and they immediately attracted the attention of the specialists. The gemmological examination proceeded to confirm initial suppositions: it was a find involving the rare orange gemstone variety known as 'spessartine' from the large, colourful garnet family. Until then, spessartines had been found in Sri Lanka, Upper Burma, Madagascar, Brazil, Australia, Kenya and Tanzania, and yet they were practically unknown in jewellery, catering mainly to the interests of gemstone lovers and collectors.

The reason for this rather shadowy existence was a simple one: specimens with really good colour and quality were only found very rarely indeed. The fantastic crystals from Namibia, on the other hand, were of an unusually fine, intensely radiant orange. Some sparkled in the rich reddish-orange of the last light of evening, seen when the sun has already disappeared below the horizon. They were more beautiful and more radiant than anything that had gone before them.

And hardly any inclusions interfered with the brilliant image of these 'noble garnets'.

Swiftly, the raw crystals found their way on to the market via a few gemstone cutting-centres. Most of them were faceted, this being the best way to bring out their incomparable colour and brilliance. But sadly, the mine on the Kunene River was exhausted after a short while. At the beginning, the gemstones had been found there at the very surface, but gradually they had had to dig deeper and deeper, the yield becoming smaller and smaller and the costs higher and higher.

Finally, production was ceased. Further searches in the remote bush country of Namibia would have required too much effort and proved too expensive. Traders and gemstone lovers greatly regretted the fact that this, of all gemstones, which had gained such an enthusiastic following so quickly, was now only available occasionally from the stocks of a few cutting-centres.

Within a very short time, this beautiful gemstone had shot up into the firmament of the international jewellery scene like a rocket. As to the name, there had been a certain amount of wrangling among gemmologists and gemstone dealers. Some called the brilliant orange to orange-red beauties 'Kunene spessartines', after the place where they had been found, whilst others spoke of 'hollandines'. But fairly quickly, the illustrative name 'mandarin garnet' began to prevail in international trade. That was the name by which the fiery orange gemstone was known when it began its conquest of the world.

It was a fitting name, and it is the one which has remained to this day. Fortunately, that unique find on the Kunene River was not the only one of its kind. In about April 1994, more orange spessartines appeared in the trade, this time from Nigeria. As far as their colour and their brilliance went they were very similar to the mandarin garnets from Namibia, even if the experienced specialist was able to discern some subtle differences.

They were found right down in the south-west corner of Nigeria, not far from neighbouring Benin. The mine is in a river-bed in the bush. During the rainy season it is necessary to pump the water out of the pits. Garnet specialist Thomas Lind of Idar-Oberstein was thrilled by the attractiveness of the new find: "There are some beautiful, radiant orange mandarin garnets from Nigeria in the trade, and among them there are, again and again, stones in sizes of over 1 carat.

I am glad to say that they enhance what is being offered in the trade, and that the supply of this gemstone, which was once so rare, has stabilised in the meantime." Now, mandarin garnets are once again available in reliable quantities, even if top-quality stones are extremely rare.

So what makes the mandarin garnet so special? First, of course, there is its colour, that radiant orange, sometimes with slight brown undertones, in the whole range of hues from ripe peach to deep reddish-orange. Colours which speak of energy and joie de vivre, individuality and a readiness to take risks. A person who displays orange is not afraid of being noticed; showing this colour indicates confidence. Unmistakably, it is a colour shown by extroverts.

But orange is more than that: for example, it plays a much more important role in Asian art than in European. There, the gods are often clothed in orange robes, and even the sky can be orange. Yellow and red, the colours from which orange is made, are not opposites in Asia, but are instead related. The robes of Buddhist monks are also orange, and they are made from a single piece of material. Orange stands for the process of all life.

All being is perceived as the constant interplay between the active male principle Yang and the passive female Yin. These are not opposites, but transform and interweave incessantly. Life means change - and orange symbolises that constant change like no other colour.

However, apart from its magnificent colour, the mandarin garnet has other good qualities which make it a truly unique gemstone. For example its good hardness. It is an uncomplicated gemstone and an ideal chaperone for all occasions. And then it has a very high refractive index, which gives it unusually strong brilliance. Even in unfavourable light conditions, small, brilliant-cut, inclusion-free mandarin garnets still sparkle with great vivacity.

And then of course there is its rarity. No-one can say how long there will be as reliable a supply of this gemstone in the trade as there is at present. So colour, luminosity, hardness and rarity combine to make this gemstone, beautiful but at the same time easy to look after, something really special. Individualists with a well developed sense of style can only say "That's the stone for me!" when they set eyes on it.