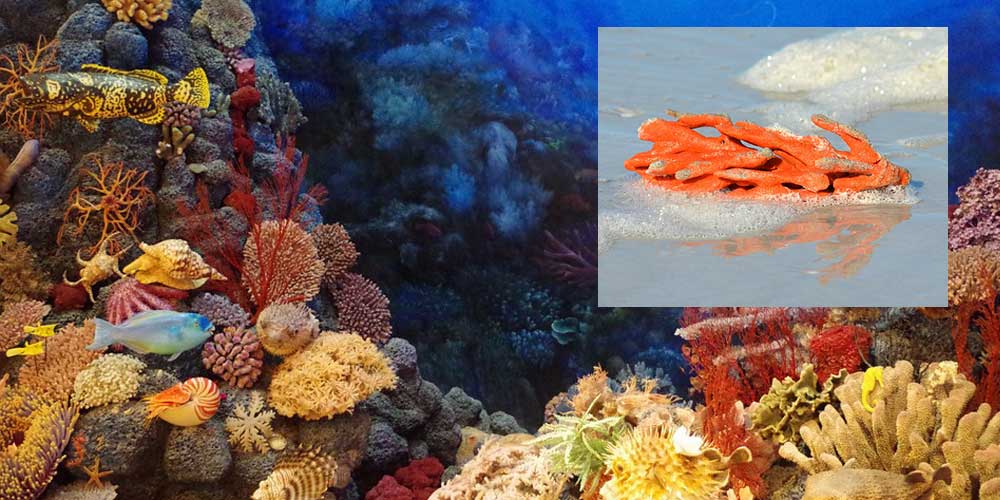 Corals are a decorative material with a very special fascination - the perfect embodiment of Man's longing for summer, sun and far-off oceans.

As to the origin of the name, the etymologists are not, however, of one opinion. Some say that it comes from the Greek 'korallion', which denotes the hard, calcareous skeleton of the coral animals, or from 'kura-halos', for 'mermaid', as the fine branches of the coral sometimes look like small figures. Others think it more likely that the word is derived from the Hebrew 'goral', (a small stone used in the drawing of lots), for coral branches used to be used in oracles in Palestine, Asia Minor and around the Mediterranean.

Corals live at depths of between three and 300 metres in the waters around Japan, Taiwan and in the Malaysian Archipelago, in the Red Sea, in the Bay of Biscay and around the Canary Islands, as well as in north-east Australia and the Midway Islands. In the Mediterranean, there are coral banks in the Tyrrhenian Sea, off the coast of Sardinia, off Tunisia and Algeria, former Yugoslavia and Turkey.

When we hear the word coral we first think of the coral reefs in the Southern Ocean or off Australia, of the reefs, banks and atolls which are among the most beautiful miracles of Nature. However, it is not these protected coral species of which we are talking here. In jewellery, it is corals such as 'corallium rubrum' and 'corallium japonicum' that are used.

Like the pearls, these are also organic jewellery materials. It certainly is an interesting fact that both of these are products of the water, chemically closely related with each other. Both consist of more than 90 per cent calcium carbonate. And it really is a miraculous thing that Nature has created both the scarlet coral and the pearl from the same, unprepossessing raw material.

Corals are the product of tiny living beings which settled in enormous colonies in the depths of warm seas long before our time. The polyps, surrounded by a fleshy skin, excrete a carbonic substance from which the corals grow like trees and branches. These can attain a height of sixteen inches (40 cm), though the actual branches seldom exceed one and a half inches (4 cm). At the forks, they are somewhat thicker. It is from these parts that the precious raw material for jewellery items, large coral beads or carvings is obtained.

Traditionally, the fragile little coral trees were brought up from the depths with trawl nets. However, since first-class corals have now become rather rare, divers are now deployed, in a less destructive process which involves their going down and harvesting the sensitive coral branches. After that, the branches are cleaned, sorted and processed by means of saws, knives, files or drills. Coral is not usually ground or cut on a wheel.

Unprocessed, coral is matt. It is not until it has been polished that it takes on that beautiful shine. It is often porous, full of holes or cracked, and in these cases it is of lesser quality. Coral of that kind is sometimes filled with coloured wax to improve its appearance. High-quality coral is of an even colour and free of cracks, blotches, striations and holes. Since genuine untreated coral is rare, it does fetch good prices. For that reason, anyone being offered what appears to be high-quality coral cheaply would do well to view the matter with a certain degree of scepsis. The best thing to do is to purchase one's high-quality coral jewellery from a reputable merchant.

The colourful, sensitive world of corals

Corals do not necessarily have to be red, even if red is thought of as their typical colour. Corals grow in Nature in a wide range of colours from red to white and from blue and brown to black. The most popular are the red hues such as pale pink or salmon, all the way out to a deep dark red. Black corals and gold corals are very much in fashion, whilst the blue ones are extremely rare. The white of the angel skin coral, suffused with pink, is regarded as particularly precious. Other well known colours are the rich red Japanese Moro coral, the pale pink 'Boke' and the red 'Sardegna'.

On the one hand corals are not particularly sensitive, but with a hardness of only 3.5 they are much softer than any other gemstone material. Their beauty can easily be impaired by the wrong treatment, for example cosmetics, hot water or bright light. Coral jewellery should be kept in a safe place and from time to time cleaned with a soft, damp towel. If the surface of the coral does get scratched, the jeweller can have it repolished.

Root or foam corals are lighter and more reasonably priced than precious coral. Root corals are actually a coral species all their own - i.e. not roots, but a special kind of coral growth. They are sometimes confused with the foam coral. The latter are those parts of the Japanese Momo coral which remain fixed in the sand or mud and form the transition from the foot of the coral to the main part of the growth. It has been in the trade for a long time. It is heavier than the root coral and somewhat more expensive. Both kinds find their way into the trade in large quantities from China and Japan. On account of their size and their relatively low weight, they are popular wherever colour and volume are in demand at low prices.

Coral has been used for decorative purposes and esteemed as a protective stone since time immemorial. Even today, red corals are still worn as a talisman to protect the wearer against evil spirits in many cultures. Modern gemstone therapists too highly esteem its positive effects. Coral, it is said, relieves tension and fear and promotes positive forms of social life.

The ancient faith in the protective and invigorating force of coral is perpetuated in the custom of putting a necklace of red corals round the neck of a small child. Young girls too are often given a fine coral necklace as their first piece of jewellery. Yet coral is more than that: in some wonderful way coral reflects the complexion of its wearer, developing a positively irresistible effect on her bare skin. Coral is one of the most attractive decorative materials imaginable. Again and again, it inspires international designers to fantastic creations.