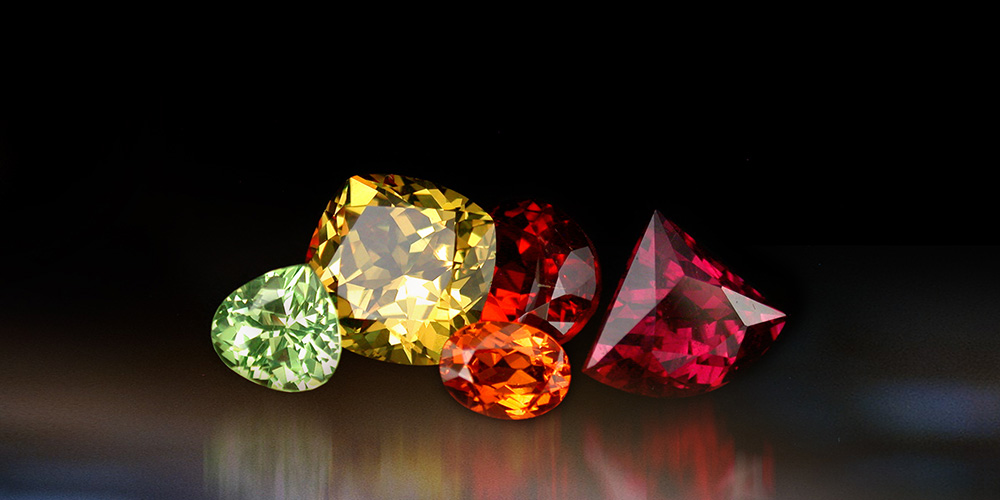 Well yes, to a certain extent, a deep, warm red indeed being the colour most frequently found in garnets. Sadly, however, far too few people are aware that the world of the garnets is far more colourful than that. Spectacular finds, especially in Africa, have enhanced the traditional image of the garnet with a surprising number of hues - even if red does continue to be its principal colour.

Thanks to their rich colour spectrum, garnets today can quite happily keep pace with changes of style and the colour trends of fashion. And thanks to the new finds, there is a reliable supply of them too. So in fact this gemstone group in particular is one which gives new impetus to the world of jewellery today.

By the term 'garnet', the specialist understands a group of more than ten different gemstones of similar chemical composition. It is true to say that red is the colour most often encountered, but the garnet also exists in various shades of green, a tender to intense yellow, a fiery orange and some fine earth-coloured nuances. The only colour it cannot offer is blue. Garnets are much sought-after and much worked gemstones - the more so because today it is not only the classical gemstone colours red and green which are so highly esteemed, but also the fine hues in between.

Furthermore, the world of the garnets is also rich in rarities such as star garnets and stones whose colour changes depending on whether they are seen in daylight or artificial light.

And what else is there that distinguishes this gemstone group from the others? Well, first of all there is its good hardness of 7 to 7.5 on the Mohs scale. With a few minor exceptions it applies to all the members of the garnet group, and it is the reason for the excellent wearing qualities of these gemstones. Garnets are relatively insensitive and uncomplicated to work with. The only thing they really don't like is being knocked about or subjected to improper heat treatment. A further plus is their high refractive index, the cause of the garnet's great brilliance.

The shape of the raw crystals is also interesting. Garnet means something like 'the grainy one', coming from the Latin 'granum', for grain. This makes reference not only to the typical roundish shape of the crystals, but also to the colour of the red garnet, which often puts one in mind of the seeds of a ripe pomegranate. In the Middle Ages, the red garnet was also called the 'carbuncle stone'. And even today, fantasy names like Arizona ruby, Arizona spinel, Montana ruby or New Mexico ruby are still rife in the trade.

The warm red of the garnet illuminated Noah's Ark

Garnets have been known to Man for thousands of years. Noah, it is said, used a garnet lantern to help him steer his ark through the dark night. Garnets are also found in jewellery from early Egyptian, Greek and Roman times. Many an early explorer and traveller liked to carry a garnet with him, for the garnet was popular as a talisman and protective stone, as it was believed to light up the night and protect its bearer from evil and disaster. Today, science has taught us that the garnet's proverbial luminosity comes from its high refractive index.

Not only do garnets have many colours; they also have many names: almandine, andradite, demantoid, grossularite, hessonite, pyrope, rhodolite, tsavorite, spessartine, and uvarovite, to quote but a few. But let us restrict ourselves to the most important and begin with the red garnets. First, there is the fiery red pyrope. Its spirited red, often with a slight brownish nuance, was a gemstone colour much in demand in the 18th and 19th centuries. Garnets from a find in the north-eastern part of the former kingdom of Bohemia - small stones of a wonderful hue - were world-famous at that time.

In Europe, they were worked into jewellery a good deal, especially in the Victorian period. That genuine Bohemian garnet jewellery was traditionally set with a large number of small stones, which were close to one another like the seeds of a pomegranate, with their red sparkle. And today too, garnets are still found in former Czechoslovakia and set close together according to the old tradition, the attractiveness of classical garnet jewellery thus consisting mainly in the beauty of the gemstones.

The larger central stones of the typical 'rosettes' are also mostly of garnet, though they belong to a different category. For the 'almandines', named after Alabanda, an ancient city, have a chemical composition that differs somewhat from that of the pyrope. And why, one might ask, are they used as central stones? That's quite simple: because Nature has created the pyrope almost exclusively in small sizes, whilst allowing the almandine to grow in rather larger crystals.

A further garnet variety, also red, is the rhodolite. a mixed crystal of almandine and pyrope. This popular garnet is of a magnificent velvety red with a fine violet or raspberry-red undertone. Originally found in the USA, it now comes mainly from the gemstone mines in East Africa, India and Sri Lanka.

The colourful world of the garnets

The specialist world was amazed a few years ago by the fantastic find of a type of garnet which had been very scarce until then. At the Kunene River, on the border between Namibia and Angola, a deposit of radiant orange to red 'spessartites' was discovered.

The spessartite was originally named after the site of a find made in Germany. Spessartites had led a quiet, shadowy existence as stones for gemstone lovers and collectors until that momentous discovery in Namibia. There were hardly any used in jewellery because they were so very rare. But this new find changed the gemstone world. Since then, its wealth has increased by the addition of this unusually fine, intensely radiant orange-red gemstone. Under the trade name 'mandarine-garnet', this wonderfully orange noble garnet became world-famous in no time at all. Unfortunately, the mine in the quiet hills of Namibia was only able to be exploited for a few years.

The search for gemstones in the remote bush country began to involve too much effort and became too expensive. So fears grew that this highly precious gemstone, which had shot into the firmament of the gemmological world like a rocket, might only become available in rare individual cases from the stocks of a few cutting-centres. That is, until another deposit of the orange treasures was discovered, this time in Nigeria. Their colour and brilliance are so similar to those of the mandarin garnets from Namibia that only an experienced specialist can discern the subtle differences.

Now for the green garnets. Green garnets?! Is there really such a thing? Indeed there is! In fact, several green varieties are known. First there is 'grossularite', created by Nature in many fine tones of yellow, green and brown and esteemed for its many fine interim hues and earth colours. Here too, there was a spectacular find: in the final year of the 20th century, extensive grossularite deposits were discovered in Mali. These Mali garnets captivate us with their great brilliance. Even the brown, which is otherwise not terribly popular, seems vivid and natural, and goes particularly well with ethnologically inspired trends.

Probably the best known green garnet is tsavorite or tsavolite, which also belongs to the grossularite group. It was originally discovered in 1967 by a British geologist, Campbell R. Bridges, in the north-east of Tanzania. Bridges and Tiffany's in New York gave this name to the previous emerald-green stone – which is named after the Tsavo National Park with its wealth of game and is near where Bridges also discovered tsavorite in Kenya. The green of tsavorite runs from vivid and light to deep and velvety and, like all garnets, it has particularly good brilliance.

The star of green garnets is the rare demantoid, a gemstone for connoisseurs and gemstone lovers. Its brilliance is positively tremendous, even greater than that of the diamond. Russia's star jeweller Carl Fabergé loved the brilliant green garnet from the Urals more than anything else, and used it in his creations. Meanwhile, the demantoid is no longer quite as scarce in the gemstone trade, thanks to some new finds in Namibia. Demantoids from Namibia are of good colour and brilliance, but they lack one tiny feature: the so-called 'horse-tail inclusions'. These fine, bushy inclusions are the unmistakable, typical feature by which a Russian demantoid is recognised.

Gemstones for every fashion trend

Anyone who loves what is pure and natural and the warm, sun-bathed colours of late summer will be fired with enthusiasm by the colour spectrum of the garnet. Today, garnets mostly come from African countries, but also from India, Russia and Central and South America. The skilled hands of cutters the world over work them into many classical shapes, but also increasingly into modern, imaginative designer cuts.

Garnets remain convincing with their natural, unadulterated beauty, the variety of their colours and their tremendous brilliance. Anyone acquiring garnet jewellery can be assured that the joy he or she derives from this beautiful gemstone gift from Nature will be long-lasting and undimmed.