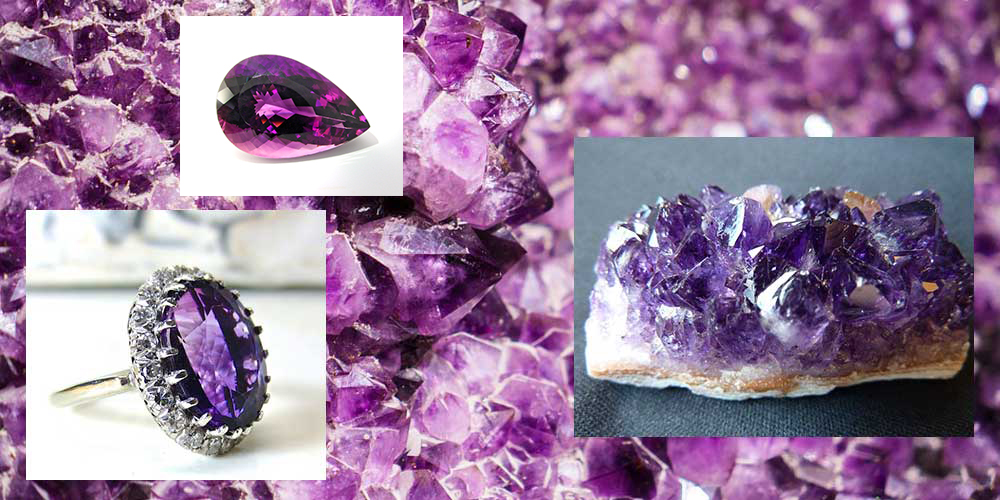 Its colour is as unique as it is seductive, though in fact this gemstone of all gemstones is said to protect its wearer against seduction.

The amethyst is extravagance in violet. For many thousands of years, the most striking representative of the quartz family has been a jewel coveted by princes both ecclesiastical and secular. Moses described it as a symbol of the Spirit of God in the official robes of the High Priest of the Jews, and the Russian Empress Catherine the Great sent thousands of miners into the Urals to look for it. In popular belief, the amethyst offers protection against drunkenness - for the Greek words 'amethystos' mean 'not intoxicated' in translation.

A more apt stone for the month of February, particularly if there is to be plenty going on in the way of carnival celebrations, could thus hardly be wished for.

A large number of further miraculous powers are attributed to the amethyst in all sorts of cultures. It was said to protect crops against tempests and locusts, bring good fortune in war and in the hunt, drive out evil spirits and inspire the intellect. A little study of the works of Pliny will reveal that this gemstone, if worn round the neck on a cord made from dog's hair, affords protection against snakebite. Later, Hieronymus even reported that eagles placed an amethyst in their nest in order to protect their young from the selfsame danger. Apart from these powers, gemstone therapists say that the amethyst has a sobering and cleansing effect.

Amethyst has also been said to quell excessive stomach acid and, according to Hildegard von Bingen, served to combat insect bites and beautify the skin. But the amethyst not only had a firm niche in medicine; it was also esteemed as a stone of friendship.

And since it was thought to put the wearer in a chaste frame of mind and symbolise trust and piety, the amethyst came to occupy a very prominent position in the ornaments of the Catholic clergy over the centuries. It was the stone of bishops and cardinals; we find it in prelates' crosses and in the so-called Papal Ring (Italian, 15th century) in the Jewellery Museum in Pforzheim.

However, the most beautiful of all crystal quartzes also posed one or two riddles for the scientists, and indeed they still haven't been completely solved to this day. The amethyst has its hardness (7), its moderate refraction and its weight in common with the other quartzes, but the crystal structure is different, and it is most unconventional. The construction is stratified, as a result of which areas and lamellae of varying colour intensity often come about. This explains why there are relatively few large cut amethysts of an evenly distributed dark colour, in spite of its having been found so abundantly in all parts of the world. It is only in the last few years that scientists have been fairly certain of having found the real cause of the colour. It is now attributed to certain iron constituents in connection with natural radioactive radiation.

One thing that has been known for a long time, on the other hand, is the fact that the amethyst changes its colour on being heated. Smoky stones are transformed at temperatures of as little as 250 degrees to a shining yellow to brownish-red, whilst clear ones, i.e. those with a high degree of transparency, become yellow or colourless at 400 degrees. Now and then Nature gives us a surprise by having created bicoloured stones, like the ones recently found in Bolivia in the form of causticised crystal nuggets.

This variety is known as ametrine, for in its formation certain energy states of iron introduce violet areas to the yellow citrine. At best, flat jewellery with a three-spoked star can be cut from it. However, the highlight for esoterics is that the energy fields can in fact be made visible in polarised light. The Henn Brothers of Idar-Oberstein even supply the photos to go with it.

Some amethysts pale almost to colourlessness in daylight. The reason for this has not yet been discovered, but it is possible to re-colour them by means of radium radiation. The fact that these stones can lose their colour makes it obvious that amethyst jewellery should not be worn while sunbathing, in a solarium or in a discotheque with black light. Sudden changes of temperature can also be harmful to the stone.

The deposits with the greatest economic significance are in various states in southern Brazil and in neighbouring Uruguay. The third major export country is Madagascar. However, this gemstone is spread all over the world. Good specimens were found in Aztec graves, though the deposits from which they were extracted are no longer known today. On the Canadian side of Lake Superior in North America, there is a place named Amethyst Harbor.

The violet quartz is found there in ample quantities, though rarely in gemstone quality. The fame of Idar-Oberstein, the German gemstone centre, is based on domestic amethyst finds. In earlier times, raw material was delivered there from the Zillertal Alps. When these nearby deposits ceased to yield, the old cutters' tradition was able to be preserved thanks to supplies organised by German emigrés in South America. Russian amethysts, which were mainly mined in winter in the Urals, were once famous for their particularly beautiful colour, which shone magnificently even in artificial light. In Tibet there were amethyst rosaries, for there the gemstone was dedicated to Buddha and was said to promote clarity of mind. In Sri Lanka, stones which have rolled down on their own are found in debris.

However, the amethyst is more likely to turn up in spaces lining agate almonds and druses in igneous rocks. What was presumed to be the largest-ever cavity was discovered in 1900 in Rio Grande do Sul. The almond measured ten by five by three metres (33 by 16 by 10 ft.) and weighed an estimated eight tonnes. The dark violet amethysts, some as large as a man's fist, may have weighed some 700 cwt. altogether.

There is a piece weighing 200 kilogrammes, taken from this Brazilian treasure, in the Washington Museum. In recent times, a find in the USA has been making headlines. In July 1993, a three-metre druse was found in Maine, which contained well over 1000 kilogrammes of cuttable amethyst, some of it in crystals 19 cm in length.

The South American deposits in particular, which were not discovered until the nineteenth century, brought down the price of the violet gemstone. The amethyst bracelet of Queen Charlotte of England, which was so famous at the beginning of the 18th century, its value being estimated at 2000 pounds sterling at that time, was apparently worth only 100 pounds 200 years later. However, the price has a close relationship with the quality, and the quality varies immensely. Most of the material from Brazil is light-coloured, a tender purple.

In Madagascar, it is generally red or violet hues which are found. Uruguay supplies the most beautiful and the deepest colour, but it is mostly blemished. Thus immaculate stones of the finest violet still fetch carat prices of well over a hundred euros. Mounted with diamond braid trimming, as has been the custom for some 100 years, enchanting pieces of jewellery are thus created. No wonder that people find it worth going to the trouble of producing imitations and synthetics.

In ancient times, amethyst was already being engraved and cut into sculptured forms, witness the bust of Trajan which Napoleon captured in Berlin. Amethyst quartz, banded with whitish layers, is particularly good to work with, though it is only ever either translucent or opaque or somewhere in between. In earlier times, people liked to drink wine from amethyst cups, which brings us back to the stone's protective function against alcoholism.

According to the ancient Greek saga, Diana turned a nymph whom Bacchus loved into an amethyst; hence the term Bacchus stone. Anyone wishing to protect a drunkard from delirium mixed some pulverised amethyst into the person's drink.