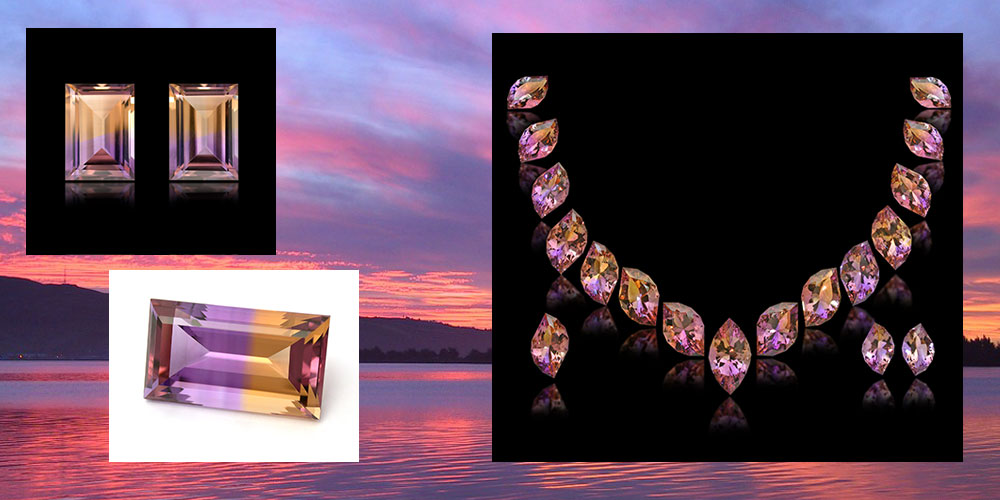 Do you love both the purple of amethyst and the sunny gold of citrine? Are you an avid Minnesota Vikings fan? I have the perfect gem for you! Sometimes amethyst and citrine colours are found in the same crystal of quartz. These bicolour yellow and purple quartz gemstones are called ametrine.

With ametrine, you can have both gem colours for the price of one! Ametrine is especially inexpensive when you consider that it comes from only one mine in the world.

The Anahi Mine in Bolivia is the major world producer of ametrine. The mine first became famous in the seventeenth century when a Spanish conquistador received it as a dowry on marrying a princess named Anahi from the Ayoreos tribe. Ametrine was introduced to Europe through the conquistador's gifts to the Spanish queen.

Ametrine is most typically faceted in a rectangular shape with a 50/50 pairing of amethyst and citrine. Sometimes a checkerboard pattern of facets is added to the top to increase light reflection. Ametrine can also be cut to blend the two colours so that the result is a mixture of yellow, purple, and peach tones throughout the stone. Ametrine is also popular among artistic cutters and carvers, who play with the colours, creating landscapes in the stone.

Ametrine is a very durable gemstone suited to a variety of jewellery uses. Most sizes and shapes are available but the colour contrast is most pronounced in sizes of over seven carats.

So why compromise, when you can have two varieties of quartz for the price of one?