The Fuchsia Rose diamond surpassed its presale estimate at Christie’s New York on Wednesday, achieving just under $7 million in the Magnificent Jewels auction. 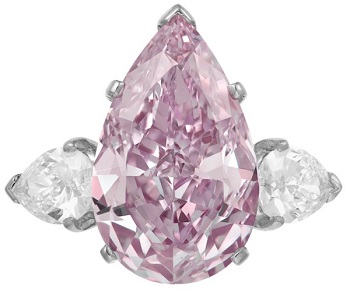 The 8.82-carat, fancy-intense-purple-pink, potentially internally flawless diamond ring garnered $6.8 million, comfortably beating its $4 million to $6 million estimate, bringing in just under $770,000 per carat and underscoring the strong demand for high-value jewelry at auction.

The sale achieved a total of $25.1 million, with 96% of lots selling, Christie’s reported.

A number of signed jewelry pieces featured in the top 10 list at the Christie’s sale. These included a Bulgari ring with an emerald-cut, 9.56-carat, D, VVS2 diamond, which achieved $630,000, and a Cartier Art Deco ruby and diamond bracelet that brought in $529,200.

Earlier, Christie’s announced that it would present the Red Cross diamond at its Magnificent Jewels sale in Geneva on May 11.

The cushion-shaped, 205.07-carat, fancy-intense-yellow diamond was fashioned from a 375-carat rough stone found at a De Beers mine in South Africa in 1901. Part of the auction revenue will go to the International Committee of the Red Cross, Christie’s said.

Besides ranking among the largest polished diamonds in the world, the stone has a striking pavilion: It is faceted in the shape of a Maltese cross.